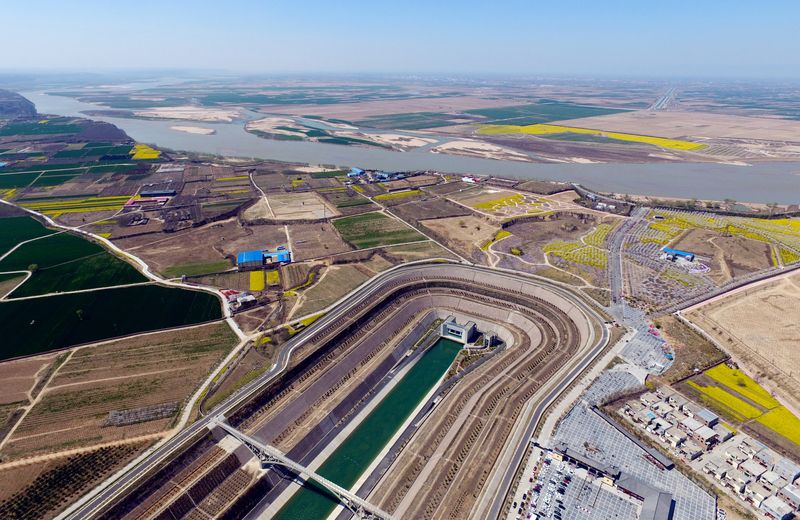 Autumn rains came too late to save the stunted stalks of Shu Xinguo’s corn crop, withered by a dry July growing season.

“We rely on the weather for our living,” said Shu, weary and resigned, his tanned hands hoisting bundles of his remaining crop — green and yellow tobacco leaves — onto a three-wheeled tractor. “There’s no water for irrigation, and the well in the village has no water either.”

Sixty kilometers away, China’s largest aqueduct transports as much as 18.3 million cubic meters of fresh water a day through Shu’s province to quench the growing thirst of Beijing in the north. None of it comes to Shu’s village or any of thousands of farms in the region.

It’s China’s age-old dilemma: a tug of war between the farms that help feed the nation, and the soaring demands of industry and city-dwellers in the parched northern plains.

With an excess of rain in the south and not enough in the north, China’s solution is as simple as it was expensive: Build three massive aqueducts to divert the water for an estimated cost of more than 500 billion yuan ($76 billion).

The result is the world’s most ambitious water transfer program, the South-to-North Water Diversion project. Its middle channel — from the Danjiangkou reservoir to Beijing and Tianjin — was finished in 2014. Proposed in the time of Chairman Mao Zedong, it is a stunning engineering feat. Some 11 billion cubic meters of water has traversed the 1,432-km-long waterway, supplying factories, businesses and 53 million residents.

“As the country’s economy develops, industries are using more water,” said Huanguang Qiu, a professor with the School of Agricultural Economics and Rural Development at Renmin University. “And the competition will become even more fierce.”