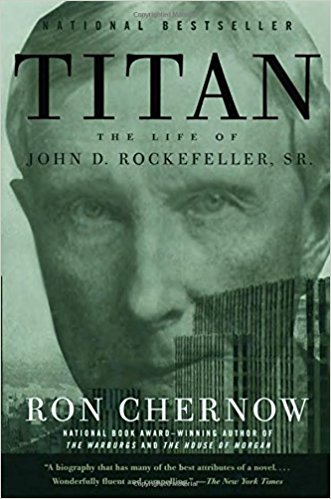 What’s in it for me? Understand that wealth alone is no reward.

Titan Ron Chernow Summary – Few people encapsulate the American dream as perfectly as John D. Rockefeller, whose life trajectory was the classic rags-to-riches story. He was self-made, determined and upwardly mobile throughout his long career. He created the template of what it meant to be rich, and understood that his wealth was not his to hoard, but was to be distributed to charitable causes.

He was a canny businessman whose dealings meant that his company, Standard Oil, acquired near-monopoly status at home, while maintaining a huge influence in foreign markets. However, when his empire was dismantled, it did not lead to a breakdown or to a wringing of hands. In fact, it made Rockefeller, who’d invested wisely, richer than ever before. This inspired a period of charitable giving and philanthropic activity, a legacy, arguably, far more important than Rockefeller’s actual business activities.

Around the year 1723, a German miller called Johann Peter Rockefeller, together with his wife and children, collected their belongings and headed for the United States. After initially arriving in Philadelphia, they settled on a farm in Amwell, New Jersey, acquiring a few properties over time. It was a modest start for a family that would, just over a century later, count one of the richest men in American history, John D. Rockefeller, among their number.

Those first few years were spent in Richford. It was a small town with a schoolhouse church, but its sawmills, gristmills and whiskey distillery signaled its position as a growing industrial center.

In the early 1840s, Rockefeller’s father decided to relocate his family to the more dignified town of Moravia, some 30 miles north of Richford. The rest of the hard-drinking, hillbilly Rockefeller clan was left behind. Bucolic Moravia marked a halcyon period for young John, as he watched his father’s logging business boom.

The family was religious. Rockefeller was brought up a Baptist, and the Church was an institution that would impact Rockefeller’s life significantly. Not only was Rockefeller to become the Protestant work ethic incarnate, Baptist religious dogma also taught him the value of continuous self-improvement and honor.

However, in the spring of 1850, the family moved once more – this time to Owego on the Pennsylvania border – after Bill was accused of raping the young househelp. Bill himself was generally a shadowy figure during Rockefeller’s childhood. He was a distant traveling salesman who was often absent for months at a time.

In his absence, Eliza gave Rockefeller tasks around the house, and he matured rapidly. In fact, he was more of a father than a brother to his siblings.

By the age of 16, Rockefeller enthusiastically entered the world of business and met with rapid success.

In 1853, Bill Rockefeller forced his family to……