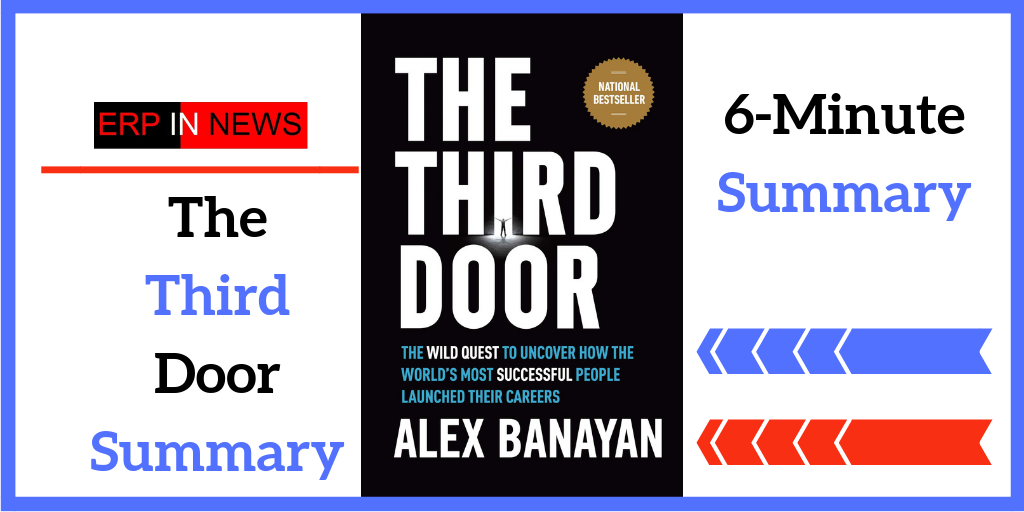 What’s in it for me? Learn how the most successful people in the world launched their careers.

The third door summary – Success in life, business or almost any field you choose, is like getting into a nightclub. There are always three doors: The first door is the main entrance, where almost everyone queues, waiting and hoping to get in. The second door is the VIP door, where the celebrities and billionaires slip straight through.

And then there’s the third door. Most people don’t even know it exists, but it does. You have to step out of line, run around the back of the club, bang on the door, maybe sneak through a kitchen. You’ll need a little chutzpah and a little initiative, but there’s always away.

The world’s most successful people went through the third door, ignoring the queue in their determination to get ahead. In these blinks, you’ll follow the path of an ambitious young man on his quest to track down and interview some of the most successful people in the world and learn the secrets of how they got ahead.

Bill Gates inspired the author to go on a quest for the secrets to success.

Alex Banayan was supposed to become a doctor. At least, that was his parents’ plan for him. But at 18 years old, a month into college as a pre-med, he realized this wasn’t the path for him.

One day, while reading a biography of Bill Gates instead of studying, Banayan started wondering. Bill Gates had become the richest man in the world and revolutionized the software industry. But how? How did he go from a regular 18-year-old kid, just like Banayan, to becoming the wealthiest man in the world? Banayan started looking into other successful people: How had Steven Spielberg, a guy who didn’t even get into film school, ended up as one of the most successful directors in history? What did Lady Gaga do to pivot from waiting tables to nailing her first record deal in 2006?

Banayan couldn’t find a book that gave him the answer to these questions, so he decided to write it himself. Why not? He’d arrange interviews with Bill Gates and of other legends, travel across the US to meet with them, write up his discoveries and share them with his entire generation.

Getting the interviews was one thing, getting to them was quite another. The hard part, he quickly realized, would be funding the travel to all those interviews.

But as luck would have it, the game show The Price is Right was being filmed a few miles away. Winning the show was how he’d fund his quest.

Some googling told him that the wackier the behavior at casting, the more chance of getting selected for the show. So when he turned up on set, Banayan hugged janitors, danced with security guards and flirted with old ladies. It worked, and he got selected. He didn’t actually know how to play the game though, so began chatting with his fellow contestants. One kindly old woman, who said she’d been watching for 40 years, took a shine to him. She advised him to always guess low, as guessing too high would get you eliminated.

Hours later, with studio lights shining in his face, Banayan won the final prize – a sailboat, retail price $31,188, which he sold days later for $16,000. His quest could begin.

“Having a teacher or boss tell you what to do makes life a lot easier. But nobody achieves a dream from the comfort of certainty.”

Meeting Tim Ferriss taught the author how to be persistent in the right way. Eventually.

After reading Tim Ferriss’s phenomenally popular book The 4-Hour Work Week (2007), Banayan became obsessed with meeting the author.At a conference where Ferriss was speaking, Banayan hid in a bathroom during…………..