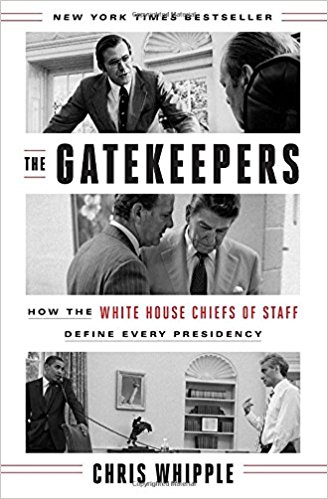 What’s in it for me? Understand the inner workings of the White House.

The Gatekeepers Chris Whipple – There’s a story from the early days of the Eisenhower administration. Supposedly, soon after Eisenhower arrived at White House following his inauguration on 20 January 1953, a staffer came running up. He had a sealed envelope in hand, marked “private and confidential.”

Much to his surprise, the staffer got an earful. “Never bring me a sealed envelope!” yelled Eisenhower, “that’s what I’ve got aides for.”

He had a point. It wasn’t that Eisenhower was upset because he hated opening his mail. Rather, he knew that structures had to be in place to ensure that nothing was a surprise by the time it reached him. He knew he had to have capable, trustworthy and intelligent staff upon whom he could rely. He needed his gatekeepers.

The role of White House chief of staff embodies the concept of gatekeeper. At first, it was a relatively informal position, but now it is seen as one of the most important posts in the White House.

The story of the gatekeepers is one of power, control and influence. You’ll see how the greatest office of state in the world is run. But one thing will become clear: It’s not so much a question of who holds the reins of power, but who lets him hold them in the first place.

In this pack, you’ll learn

The role of chief of staff took its current form during Richard Nixon’s presidency.

Richard Nixon’s reputation isn’t great these days, but he shaped the modern presidency through his use of a dedicated chief of staff.

Nixon’s Democratic predecessor, Lyndon B. Johnson – usually known as LBJ – hated the idea of concentrating power in one chief adviser. Instead, LBJ got personally embroiled in all the organizational aspects of the presidency. He opened letters and even arranged appointments with members of the cabinet himself. In doing this, he’d overstretched himself, and Nixon was determined not to make the same mistakes.

Nixon, therefore, turned to H. R. Haldeman to act as chief of staff. The role had existed before, but Haldeman shaped its modern form. Haldeman used his powers to organize procedures for White House staff.

It was also Haldeman’s responsibility to keep Nixon on the straight and narrow.

He wasn’t always successful though. The tape recorders that Nixon had installed to document Oval Office conversations provided evidence that Nixon wanted to illegally break into the Brookings Institute. He suspected that documents leaked to the media from the State Department were stored there.

On that occasion, Haldeman managed to restrain Nixon from authorizing the raid, but he couldn’t always keep his increasingly neurotic president in check.

The paranoia surrounding the White House led to the Watergate scandal, which involved forced entry and the planting of surveillance devices at the Democratic National Committee offices. Ironically, Nixon was caught on his own devices approving the payment for those who had broken in. His downfall soon followed.

Even though Haldeman wasn’t ultimately successful, the paradigm for the White House’s organizational staff system had been set.

The release of the incriminating White House tapes resulted in Nixon resigning on 9 August 1974. It was either that or impeachment.

But it was a shaky start. Ford’s approval rating plummeted when he decided to issue Nixon with a free and absolute pardon to stop any possible indictment.

To stem the tide, Ford turned to Donald Rumsfeld to act as chief of staff. Rumsfeld had a reputation for no-nonsense discipline. His career in Congress demonstrated that he knew how to run a ruthlessly organized machine. He was the man for the job.

However, Rumsfeld had three conditions. He wanted absolute authority over the president’s schedule. He also demanded that he act as top adviser in all decision-making and that he would take a cabinet position as soon as one was free.

Ford agreed. Rumsfeld would put the White House back in order.

As part of his plan, Rumsfeld decided to delegate many tasks to his young deputy, Dick Cheney. They kept close to Haldeman’s playbook: schedules were tight, agendas meticulous, and the president was only given information relevant to the situation.

However, they couldn’t stop Ford from making public gaffes. Most memorably, in a 1976 presidential debate against Jimmy Carter, Ford claimed that there was no Soviet domination of Eastern Europe.

At one point in 1975, Ford found himself 33 points adrift from Carter in the polls. Rumsfeld saw that the writing was on the wall.

The Gatekeepers Chris Whipple – Consequently, Rumsfeld and Cheney sent a memo to the president, expressing their doubts and relating the changes that were needed to reverse his fortunes. Ford heeded their advice – his response was brutal. The Halloween Massacre saw a massive staff reorganization. Rumsfeld became defense secretary, and Cheney the new chief of staff.

It was no good. Although Ford managed to claw some points back, a difference of just 9,000 votes in Ohio and Hawaii meant that Carter would be the next president.

Jimmy Carter’s presidency was marred by him acting as his own chief of staff.

Carter’s successful presidential campaign team was led by Jack Watson – a Harvard Law graduate and Washington insider – together with Hamilton Jordan, a political strategist who’d been Carter’s primary advisor when he was governor of Georgia……