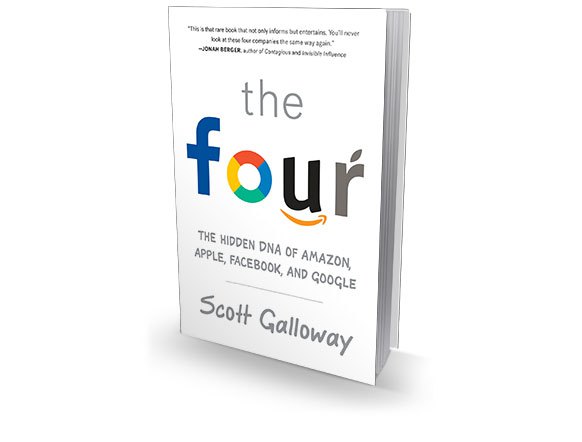 What’s in it for me? Familiarize yourself with the four companies that have shaped today’s world.

The Four Scott Galloway Review – Do you own any Apple products? If not, have you checked your Facebook feed today? If you’re boycotting both Apple and Facebook, then when was the last time you bought a book – or anything – from a company other than Amazon? And if you’re also a militant offline shopper, then how long has it been since you conducted a Google search?

There may be those out there who can say, with a clear conscience, that they’ve done none of these things in the last few days. But most of us have interacted with either Apple, Facebook, Amazon or Google, or some combination of the four, within the last 24 hours.

So how did these companies come to dominate the modern marketplace? In these blinks, you’ll learn how the Four achieved success, and that, though they proclaim themselves to be benevolent pioneers of the future, their motives don’t always chime with that message.

Every human has needs. And today, four companies – the author refers to them as the Four Horsemen – seek to satisfy them all.

Google has supplanted God. Instead of directing questions to an ever-silent deity on high, we now type them into Google’s search engine and receive answers instantaneously.

Facebook provides the love and connection that were once only to be found at home or among friends.

Apple shores up our sex appeal. The iPhone and the MacBook aren’t technically superior to other smartphones or laptops. But they’re undeniably sexier.

And Amazon, the temple of consumption, is there to bring us everything our heart may desire, be it fiction, food or fashion.

These Four Horsemen – god, love, sex and consumption – probably aren’t harbingers of a biblical apocalypse. But their ubiquity has certainly changed the world.

Today, it doesn’t matter whether you’re searching for a nail file or a novel – you’ll probably look for it on Amazon first. In the United States, Amazon is already the top choice for online purchases, and it’s swiftly moving into that position abroad as well.

And Apple isn’t only the producer of universally coveted mobile phones and computers; it’s also the most profitable company ever.

Meanwhile, 1.2 billion people visit their Facebook profile every day. In other words, Facebook has managed to congregate nearly one-sixth of the world population in the same digital space.

Finally, Google is a latter-day oracle, an ever-flowing fountain of knowledge. There’s no question we can’t ask it, and the answers come back at pace – in roughly 0.0000005 seconds……………………..