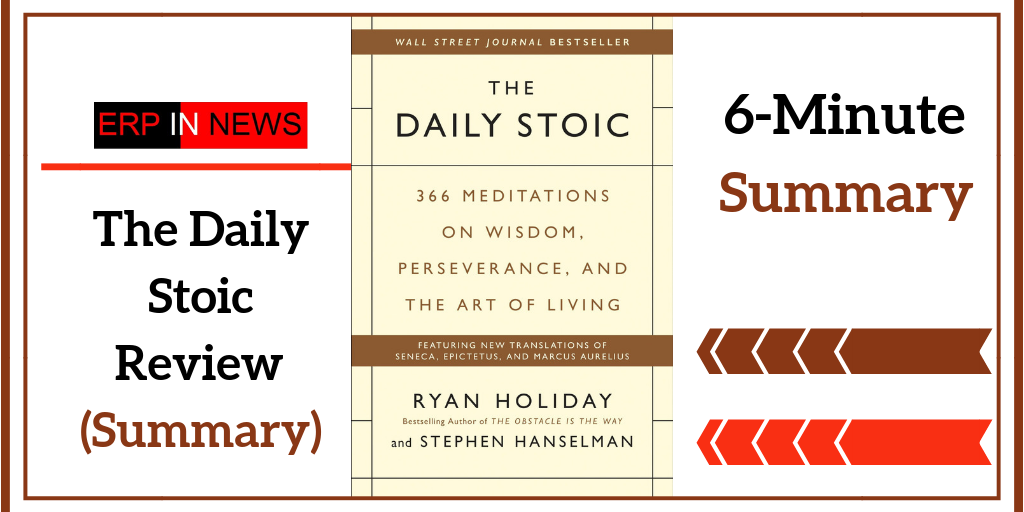 What’s in it for me? Refresh your approach to modern life with lessons from the classical world.

The Daily Stoic review – Life can sometimes be a bit of a grind. It can be hard to know how to motivate yourself, or even figure out if you’re having a positive influence on those around you.

If only there was some sort of wisdom or guidance that could provide answers! As with many things, the Greeks got there first: schools of philosophy have been with us for almost 2,500 years. Many philosophies tie themselves in knots considering pointless questions, such as “How many angels can dance on the head of a pin?”, or the Platonist Plutarch’s infamous “Which came first? The chicken or the egg?”

But Stoicism is a different sort of philosophy. This school of philosophy was founded in Athens in the early third century BCE and dealt with the struggles of everyday life.

What we know about Stoicism is based on the surviving texts of three great intellectuals in the Roman Empire who were versed in the original Greek theories: there are the meditative essays of the Roman Emperor Marcus Aurelius, the personal letters of playwright and philosopher Seneca the Younger and the handbooks and lectures of the slave-turned-renowned-teacher Epictetus.

Join the authors as they lead you through these classical texts, sifting out the fundamentals of Stoicism and answering that eternal question: “How best should I live?”

Stoics cultivate awareness of both themselves and others.

We often think of philosophy as a bookish pursuit, or perhaps as the lifestyle choice of bearded old men living ascetically in caves. But Stoicism isn’t like that – it’s for the real world. If you’re going to be a Stoic, you’ll have to be plugged in and aware of yourself and those around you.

The first precondition of any philosophy is clear thinking. And for Stoicism, that means beginning with self-examination.

The great Stoic teacher of the second century CE, Epictetus, got to the heart of the matter in his Discourses. He stated that we become philosophers the moment we first examine our preconceived notions and ask questions about our emotions, beliefs and even the words we use each day. By this process, we become attuned to the possibility of analyzing our own minds.

It’s no easy task of course. Ego and self-deception impede learning; no one is going to learn anything new if they think they know everything already. That’s why honest and truthful self-assessment is critical.

The downside to this is that you’ll have to take a good hard look at your weaknesses. It might be scary to admit you have them and that you might have been thinking too highly of yourself all along. On the other hand, it’s just as dangerous to undersell yourself. Try to remember those moments in life when you’ve risen to the occasion.

Aside from self-reflection, it’s also important to be aware of those around you.

The people with whom you choose to spend your time will ultimately influence the kind of person you become. If you’re around people who push you to be better, you’ll improve. Of course, the opposite dynamic is true: people may try to bring you down to their level.

The Roman playwright and philosopher Seneca, who was a generation older than Epictetus, advised that we should each keep someone in mind whom we respect and admire. Their presence in our mind is sure to guide better judgments and actions.

The eighteenth-century economist Adam Smith was of a similar mind and even had a name for it: the indifferent spectator. For Smith, it didn’t even have to be a real person. The mere thought that someone is witnessing and sympathetically judging our behavior will help us.

The general principle of these two points is clear: if we get to know………..

This article was Published on Erpinnews

Why Serve: 3 Big Benefits of Joining the Marines

What To Know About VPN Safety

Which ERP Systems Are Most Popular With Their Users In 2021?

Should you move to SaaS ERP? Top factors to consider