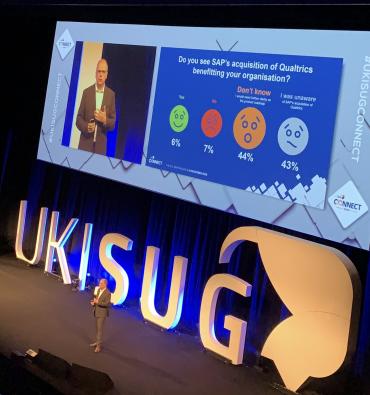 As 2019 closes out, SAP customers are finding it increasingly difficult to buy into the SAP messages of X and O. Here is why.

SAP customers-My purpose in attending SAP UK & Ireland SAP User Group this year was to test the barometer of interest in making the switch to S/4HANA in the context of other large scale techology provider events I’ve attended and feedback from those in the SAP ecosystem with whom I am connected. To put that in context I have around 1,000 engaged SAP related connections across a variety of channels. In landscape terms, it’s not a pretty picture.

Even the most advanced customers are largely unimpressed with SAP’s broad scale X-O messaging, despite what I saw as a compelling presentation around a car breakdown scenario demonstrated during the UK & Ireland SUG keynote session. It worried me that no customer I met referenced the demo as something worthy of further review.

For example, Jazz Pharmaceuticals, a stand out showcase for an S4/HANA greenfield implementation (more later) cannot find a compelling X-O scenario within their business model. Instead, and in common with other customers, Jazz insist that SAP focus on keeping their businesses going at an operational level, at scale, and across international borders – skills for which SAP remains unmatched and uniquely equipped.

More worrying, I found myself consistently fielding questions around the viabillity of SAP as a competitive solutions provider over the coming years in environments where the top of mind topics are not the integration mantra to which Christian Klein, co-CEO has nailed his management mast. More mundane matters like indirect access, business use cases for an S/4 switch and the post 2025 EOL ECC issue loom large and for which there are precious few solid answers.

Explained: How are Bitcoin and Ethereum blockchain different