Online CRM vendor Salesforce has enhanced the field service and several other capabilities across its platform, reconfigured its packaging, and raised prices. It has also added Accenture as a cloud CRM customer.

Salesforce (CRM) announced price increases, a new chief operating officer, a big new customer — Accenture — and updates to its Salesforce Lightning platform with field dispatch and other features. The online CRM company’s CEO Marc Benioff and other executives delivered the news at an event in San Francisco this week.

Product updates include the next generation of what Salesforce calls its Customer Success Platform, Salesforce Lightning — a component-based way for organizations to build their own applications for the Salesforce platform without the need to code. The company has incorporated a configure, price, and quote (CPQ) solution into the platform from its December acquisition of SteelBrick, and added a new component called Field Service Lightning, which it says adds Uber-like dispatch capabilities to the platform.

Forrester Research Senior Analyst Ian Jacobs told InformationWeek in an interview that Salesforce’s approach to adding field service functionality is “lightweight” and internally developed. That marks a difference from Salesforce competitors, which have sought to add this field and dispatch functionality to their products through acquisition. Oracle acquired TOA in July 2014, and Microsoft acquired FieldOne in July 2015. Jacobs said Salesforce’s route to adding field service to its platform offered benefits, and he expects other companies to take a similar approach.

“It’s a smart way to get into the field rather than buy into it,” Jacobs said. Oracle, having acquired TOA, now must integrate all those components into its own platform, and that’s no small task.

“I think Salesforce’s lightweight approach is one you will see more of from Salesforce competitors in the future,” he said.

In addition to the new field service capabilities, Salesforce is “infusing Lightning in all our products,” said Sarah Patterson, senior vice president of product marketing and strategy, during the San Francisco event this week. For instance, Salesforce will bring Lightning to Community Cloud to enable customers to stand up their own communities, and then enable managers to view data on how people are interacting with those communities. Service Cloud Lightning will add Omni-channel Supervisor, a feature that enables the dynamic assignment of agents and the monitoring of work in real-time.

Salesforce showed new packaging for Service Cloud Lightning Editions, which included more premium features in the less expensive versions, but also reflected a price increase across all versions. For the enterprise edition, for example, prices went from $135 per user per month to $150 per user per month.

“It’s a good time to raise prices competitively,” Jacobs said. That’s because organizations now understand how to budget platform-as-a-service and software-as-a-service offerings. “As a percentage, it’s not that much higher.”

Salesforce also showcased a customer win during the event, Accenture. The business and IT consulting firm is a longtime partner of Salesforce and Salesforce’s competitors in the CRM space that helps organizations with their implementations of the online CRM platform. At the event this week, Accenture CIO Andrew Wilson said his company has moved 25,000 users in 50 countries to the Salesforce platform in a project that took four months from pilot to production.

“You are making the CIO’s job very easy,” Wilson said during the event.

Accenture Group chief executive for America Julie Sweet, also at the event, said her biggest lesson learned from the project was, “We should have done it sooner. We didn’t move fast enough to Salesforce. We believe the best is yet to come.”

A spokesperson from Accenture confirmed that the company is using Salesforce as the CRM system across the entire company for sales. She declined to comment on whether the Salesforce project included a migration from another platform.

Accenture has also been on an acquisition spree recently, buying up Salesforce partners. The company purchased Cloud Sherpas in September 2015, and last month it acquired CRMWaypoint, saying the moves strengthened its Cloud First strategy and its Salesforce capabilities.

Forrester’s Jacobs said the Accenture move to Salesforce that was announced yesterday marked a vote of confidence for Salesforce’s mobile capabilities.

“They have made the case for Salesforce that mobility and mobile-first thinking is what is going to win the truly large deals,” he said. “If you are a consultant on the road, or a sales manager that has a territory, most of your interactions are going to be through a mobile device.”

Other news announced during the event included the addition of Lightning Voice natively embedded into Sales Cloud Lightning, a feature that lets reps connect with prospects via a click-to-call button, and then lets reps auto log those calls.

Salesforce’s spring and summer 2016 releases will include Process Builder for App Cloud, for creating enterprise workflows; the introduction of Heroku Enterprise, among other new features; the launch of Journey Builder Predictive Journeys; and other new features and components. 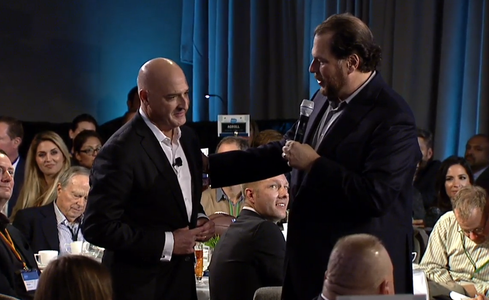 Salesforce also announced the promotion of president and vice chairmanKeith Block to chief operating officer. Block has served in these roles at Salesforce since he joined the company in 2013, and will continue to retain his existing titles. He joined Salesforce in 2013, a year after leaving a long career at Salesforce rival Oracle.

Block will continue his leadership of the sales organization with this new title, Salesforce said in a prepared statement.

Does your company offer the most rewarding place to work in IT? Do you know of an organization that stands out from the pack when it comes to how IT workers are treated? Make your voice heard. Submit your entry now for InformationWeek’s People’s Choice Award. Full details and a submission form can be found here.