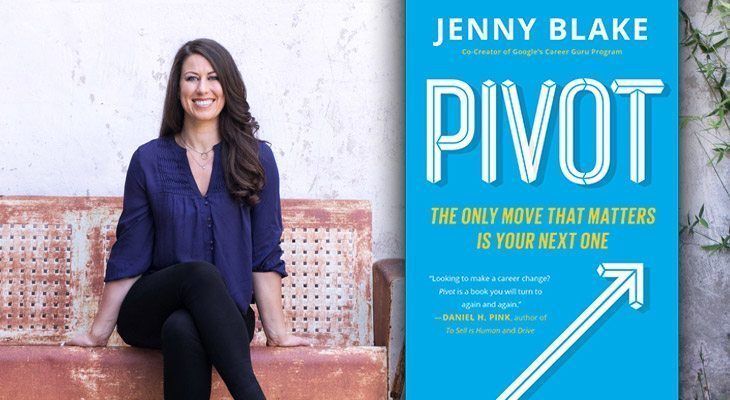 What’s in it for me? Don’t waste time and money waiting for the right career to come to you.

Pivot summary – Maybe you’re dissatisfied with your current position and are looking to start a new company. Maybe you want to transfer to a new position within your firm or even change industries. Perhaps you’re a manager who wants your employees to be satisfied and productive.

Regardless of which of these might apply to you, you probably know that making a major shift in your career direction can take time, and – if done badly – can be very expensive.

But it needn’t be. The following blinks will teach you how to pivot. There are four steps involved: plant, scan, pilot and, finally, launch. There’s also a fifth element, lead, if you’re a manager looking to apply these useful lessons for your own employees.

Join Jenny Blake as she shows you just how easy and efficient changing careers can be.

Changing career paths is becoming increasingly common and isn’t something to be afraid of.

We all know the feeling: you’re stuck in a rut in your job, but you’re too scared to switch things up and get out. After all, it might well put your finances at risk. Perhaps your family and friends have expressed concern at your desire to change tracks. They might even say it’s some sort of age-related crisis.

But guess what? It’s perfectly normal for you to feel that way.

These days, it’s quite normal to have multiple careers. Few people stay at the same company for their entire working lives before retiring – things just don’t work that way anymore.

In fact, the average American employee stays in one position for just four to five years.

Adam Chaloeicheep is a case in point. Chaloeicheep was once creative director of a real estate development company in Chicago, but, burnt out, he left his job and headed off to Thailand to study meditation.

Eight months later he was back. His mind was clear. His passions for fashion, technology, entrepreneurship and brand strategy would now guide him. He went back to school to broaden his skill set and then started his own company, ABC Design Lab. Fulfillment and financial success followed soon after.

Yes, Chaloeicheep’s story is a little on the extreme side. But it’s indicative of a broader trend.

A recent Gallup poll showed that up to 90 percent of employees are either “not engaged” or “actively disengaged” from their jobs. It’s no great surprise, then, that people are on the lookout for new opportunities.

Crises that make you look elsewhere are in no way voluntary. But you can use that same outward-looking mentality to make a deliberate career shift in a new direction. It’s known as a career pivot, and to do it, you don’t even have to leave your current employer.

Let’s take Amy Schonberger as an example. She felt stuck as a senior creative strategist in a public relations firm, but she wasn’t ready to ditch just yet.

Rather than looking for new jobs, Schonberger started taking responsibility for social media and blogging. Her coworkers weren’t interested themselves. They felt working in social media would damage their reputations.

But Schonberger knew better, and before long, she found herself dealing with the company’s biggest clients. Her status as a social media expert soon led to her appointment to a new, official role: director of digital entertainment.

Pivoting isn’t something you do without planning though. Let’s look now at all the stages along the way.

Step back and define your values so you know what you want to achieve.

It makes no difference whether you want to found a company or if you want to take on a new role at your current firm – change can be overwhelming.

However, you can make things easier by zooming out to get the big picture and thinking about how you want to plant your pivot.

There’s no need to get tangled up in the hows and whens of your pivot just yet. First of all, establish your vision: think carefully about what your broader values are.

The author once had a client, Justin, who was sick of working for his family’s real estate business. Instead of delving into the issues of what Justin should do, the author’s first step was to identify Justin’s values and status.

Through their discussions, they determined that the most important factors for Justin were his health, financial security, environment and relationships with like-minded people. Based on this information, they were able to discuss Justin’s career options together.

Within a few months, Justin had been accepted to a business school in San Diego on a scholarship. There, he was able to meet new and inspiring friends, in a place that offered an inspiring and healthy environment.

The trick is to keep the focus on your dreams…………….