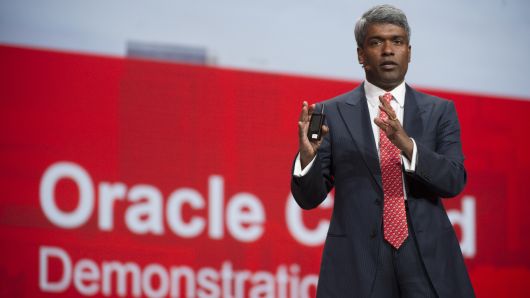 Thomas Kurian, one of the top executives at Oracle, is taking time away from the company for an unspecified period of time, the company has told CNBC.

“He’s taking some time off. We expect him to return soon,” a spokeswoman wrote in an email.

In an email to employees obtained by CNBC, Kurian wrote that he was taking “extended time off from Oracle,” and thanked employees for their work in connection with Oracle’s shift to the cloud, which he has been responsible for.

“I am so very proud of all that we have accomplished together and so grateful for having had the opportunity to help you on that journey,” Kurian wrote in the email.

He did not say when he might return. He included his personal contact information at the end.

Kurian joined Oracle from McKinsey in 1996 and has held his current position, president of product development, since 2015. He has regularly appeared at company conferences.

Kurian, who reports to executive chairman and chief technology officer Larry Ellison, has been in charge of software development, as well as taking Oracle’s own technology to the cloud, according to a biography on the company’s website. “Under his leadership, that business [Fusion Middleware] became the fastest-growing within Oracle and the industry’s leading middleware product suite,” the biography says.

Kurian boasts on his LinkedIn profile that his organization contains 35,000 people in 32 countries — about one-fourth of Oracle’s entire employee base.

He received $35.7 million in total compensation in the the fiscal year that ended May 31, 2017. For that period Kurian got the maximum possible amount of performance stock units; the board’s compensation committee pointed out in a filing that “Oracle’s cloud SaaS [software as a service] and PaaS [platform as a service] offerings experienced strong year-over-year revenue growth.”

His twin brother George Kurian is president and CEO of NetApp.