Home Analytics Up next: Disposable IoT

Sigfox shows a 20-cent IoT wireless tracker chip that could report when and approximately where a package is opened.

What if every package shipped contained a $0.20 tracker chip that could report when and approximately where the package was opened?

That’s a service that internet-of-things wireless network operator Sigfox thinks its partners could offer over the next year.

It demonstrated a prototype wireless module contained in a cardboard envelope at its partner meeting in Prague on Tuesday, triggering the sending of a text message when the envelope was opened.

Ripping open the envelope, Sigfox scientific director Christophe Fourtet showed off what he described as “an ultra-thin battery, ultra-thin contacts, and an ultra-low cost module, a few tens of cents.” Seconds later, his phone buzzed to report delivery of the package. 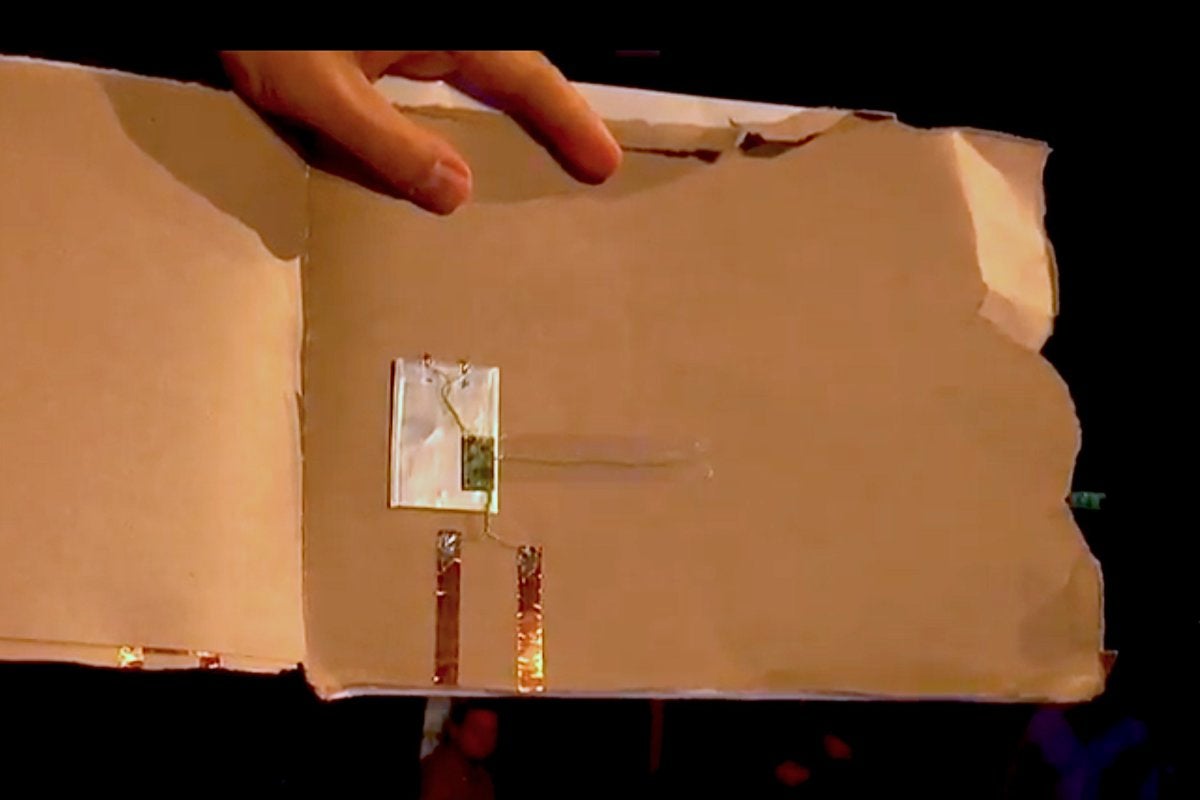 The Sigfox Admiral Ivory service uses low-cost wireless modules like this one, embedded in a shipping envelope, to transmit short status messages from disposable objects.

How Sigfox’s partners have been able to cut the cost of those wireless modules from US$15 in 2015 to $2 today — and, by dropping some non-essential functionality — will cut it to $0.20 in the near future is largely down to the architecture of its network.

Its wireless base stations across the country use software-defined radios and highly sensitive antennas to listen out for 12-byte packets of data sent by simple, battery-powered wireless modules. Sigfox can then retransmit those messages over the internet, trigger the sending of SMSs, or feed them into corporate IT systems through its APIs.

The modules that work with Sigfox’s classic service, now renamed Admiral Blue, are bidirectional (they can receive as well as send) and can encrypt their messages.

“If you don’t need the bidirectional transmission, if you don’t need the full security, we can do something simple,” said Fourtet. That simple service, called Admiral Ivory, works with modules little more sophisticated than a garage door opener or wireless doorbell. “It’s an almost free-running oscillator with two basic IOs that you can find on any simple microcontroller or almost any digital device,” he said.

The modules don’t need a GPS receiver to report their location: That’s all handled by Sigfox’s network. It’s able to locate the modules by comparing the strength of the signal received by its different base stations. For now it’s accurate to within a few kilometers for 80 percent of devices.