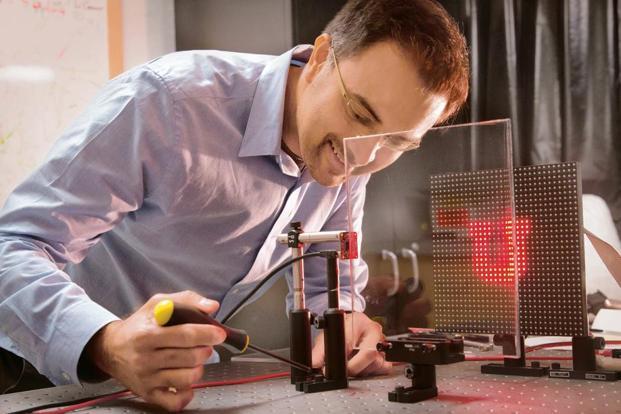 In the future, your car windshield could become a giant camera sensing objects on the road or a window in a home could be turned into a security camera. University of Utah electrical and computer engineers have discovered a way to create an optics-less camera in which a regular pane of glass or any see-through window can become the lens. Their innovation was detailed in a research paper, “Computational Imaging Enables a ‘See-Through’ Lensless Camera,” published in the newest issue of Optics Express.

University of Utah electrical and computer engineering associate professor Rajesh Menon and his team took a picture of the University of Utah’s “U” logo as well as video of an animated stick figure, both displayed on an LED light board. An inexpensive, off-the-shelf camera sensor was connected to the side of a plexiglass window, but pointed into the window while the light board was positioned in front of the pane at a 90-degree angle from the front of the sensor. The resulting image from the camera sensor, with help from a computer processor running the algorithm, is a low-resolution picture but definitely recognizable. The method also can produce full-motion video as well as color images, Menon says in a 21 August press release.

Applications for a lensless camera can be almost unlimited. Security cameras could be built into a home during construction by using the windows as lenses. It could be used in augmented-reality goggles to reduce their bulk.

With current AR glasses, cameras have to be pointed at the user’s eyes in order to track their positions, but with this technology they could be positioned on the sides of the lens to reduce size. A car windshield could have multiple cameras along the edges to capture more information. And the technology also could be used in retina or other biometric scanners, which typically have cameras pointed at the eye.

An algorithm-based system that identifies tell-tale linguistic cues in fake news stories could provide news aggregator and social media sites like Google News with a new weapon in the fight against misinformation.

The University of Michigan researchers who developed the system have demonstrated that it’s comparable to and sometimes better than humans at correctly identifying fake news stories. In a recent study, the system successfully found fakes up to 76% of the time, compared to a human success rate of 70%.