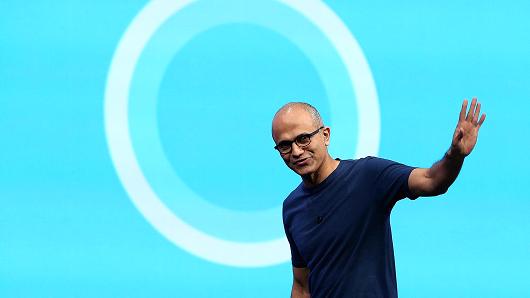 Investors have been watching Amazon and Apple in the race to $1 trillion in market capitalization, but Morgan Stanley is betting on Microsoft to reach that milestone in the next 12 months thanks to cloud adoption.

“Strong positioning for ramping public cloud adoption, large distribution channels and installed customer base, and improving margins support a path to $50 billion in EBIT and a $1 trillion market cap for MSFT,” Morgan Stanley’s Keith Weiss wrote in a note to clients Monday.

loud computing uses remote servers hosted to store and process data instead of a personal computer or local server. Microsoft looks poised to keep a dominant share of the public cloud market, which Morgan Stanley expects to more than double in size to more than $250 billion.

The combination of Microsoft’s cloud assets with existing assets, including a large customer base and distribution channel, should help the company gain market share over the next three years, Morgan Stanley said.