The deep partnership makes Red Hat Linux the preferred choice on Azure. It also calls for a first-of-its-kind co-located center, staffed by technicians from both companies, to provide support for enterprise customers.

The deal will make Red Hat Linux the “preferred choice” for enterprise Linux workloads on Microsoft Azure, the software giant’s infrastructure-as-a-service (IaaS) platform. Microsoft is one of two companies to achieve Leader status in Gartner’s Magic Quadrant report for IaaS. The other isAmazon Web Services (AWS).

The partnership also calls for a first-of-its-kind colocated enterprise support center, with technicians from both Microsoft and Red Hat in the same building. The center will be physically located in Microsoft’s headquarters in Redmond and begin operations in a few weeks, executives from both companies said during a webcast this morning. 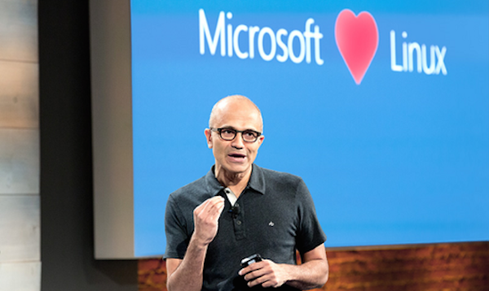 The deal marks a gigantic shift for the two companies. Microsoft, creator of the Windows operating system, has competed against Red Hat, which offers a top Linux operating system distribution and other open source solutions.

Ten years ago, such a deal seemed impossible. Red Hat President of Products and Technologies Paul Cormier said in this morning’s webcast that the creation of the partnership was driven by strong customer demand on both sides.

Microsoft and Red Hat will provide a consumption-based on-demand pay-as-you-go license model for Red Hat products on Azure that is supported by both companies. Also, Red Hat subscriptions will become portable to Azure, enabling consistent application platforms on-premises and off-premises.

Microsoft Cloud and Enterprise executive VP Scott Guthrie said that Microsoft’s .NET developers will now be able to build applications that can run on Red Hat Linux and Red Hat OpenShift. Red Hat Enterprise Linux will be the primary development and reference operating system for .NET Core on Linux.

“It’s a win-win,” Guthrie said during the webcast. “It enables flexibility and choice for all developers, regardless of language.”

Guthrie said that there are no plans today for Azure to natively runOpenStack, but Cormier said that it would potentially be possible to bring Windows virtual machines and containers into the Red Hat OpenStack environment.

Microsoft and Red Hat will provide a deeper dive into the ramifications of this deal for particular products in a subsequent webcast scheduled for Nov. 11.

“Two operating systems emerged as mainstays in the datacenter: Windows and Red Hat Enterprise Linux,” Red Hat president of products and technologies Paul Cormier wrote in a blog post today about the partnership. “There were ‘Red Hat shops’ and ‘Microsoft shops.’ The idea of proprietary software companies embracing open source was hard for many to imagine.”