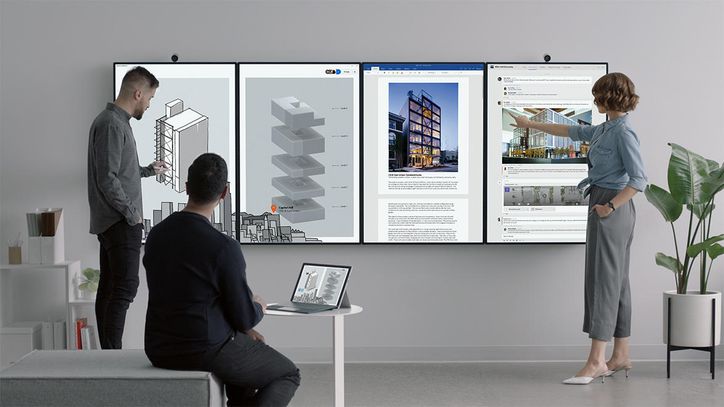 Microsoft features- Microsoft is unveiling hardware changes to its Surface Hub 2 today. The software giant first unveiled its 50-inch display earlier this year, with a promise of a 2019 release. While the hardware will now be released in Q2 of 2019, many of the cool new software features will require a hardware and software update set to launch in 2020.

Microsoft is planning to use removable processor cartridges in its Surface Hub 2S product that launches next year, and users will be able to purchase an upgrade cartridge to the Surface Hub 2X in 2020. The cartridges slot into the back of the Surface Hub 2 hardware and can be upgraded or serviced. Microsoft’s hardware upgrades sound similar to Samsung’s previous efforts with smart TVs that you could upgrade each year with an “evolution kit” that updated the processor.

It appears that Microsoft has separated its Surface Hub 2 into two different versions for businesses to allow them to pick and choose. Many businesses aren’t ready to make the move to a fully cloud-powered Surface Hub and services like Office 365. The Surface Hub 2S is aimed at those who still have on premises servers for Exchange and other Microsoft services, and when they’re ready they can upgrade to the Surface Hub 2X.