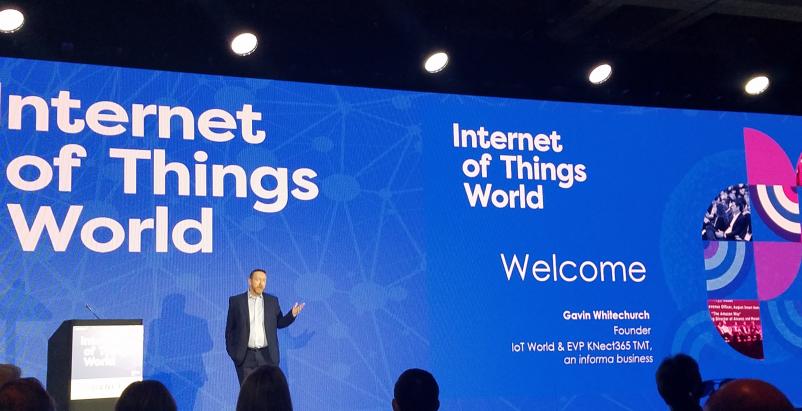 As cities look into implementing smart solutions, the Internet of Things (IoT) is an obvious asset. The ability to derive data from a network of sensors embedded into existing infrastructure is a tool that brings huge potential to communities of all sizes. From air quality to congestion to spending habits, the insights gained from the IoT are invaluable to not only cities, but all organizations.

With these benefits in mind, attendees from both the public and private sectors convened at IoT World 2018 to learn more. Held at the Santa Clara Convention Center from May 14-17, IoT World showcased the latest technological innovations in the market alongside keynotes, panels and workshops.

As the show’s programming progressed, clear themes emerged that came to define this year’s IoT World. Not all of them were new. Cybersecurity, always a popular topic, was the focus of many presentations this year. As IoT Expert John Horn explained, the increasing number of devices connected to the network has increased the number of vulnerabilities.

“Infrastructure is only as strong as the weakest link,” Horn said.

An oft suggested solution was edge computing, or analysis handled by sensor units on-site and storage handled by cloud services. Amazon and Microsoft both advocated for such a model and promoted their suites of solutions.

How both of those companies, along with various others, presented those solutions highlighted the other consistent theme of the show: putting people first. As has become a common refrain, technology for technology’s sake is not a viable method for deploying solutions. Instead, as speakers argued, solutions need to be crafted with real-world problems in mind. Any private sector entity looking to succeed with data and the IoT needs to be less of a vendor and more of an involved stakeholder.

“If a vendor comes in and just talks about tech, the conversation will be over in 60 seconds,” Kansas City CIO Bob Bennett said during a panel. “I don’t want vendors, I want partners.”

To recognize those who have already made strides in the IoT market, several companies were honored at the show. Lunewave won the Project Kairos Startup Innovation of Things Award while the team Bright Eyes won the IoT World Hackathon.

The show will be back in Santa Clara next year from May 13-16. To review key themes and insights from this year’s conference, take a look at the curated social media timeline below.

How to recognize the IoT as it rolls into 2021