Home IIoT/M2M IoT Can Give Your Retail Business a Competitive Edge. Here’s What You Need to Know.
In a challenging environment for retailers, the internet of things is your secret weapon to staying relevant to brick-and-mortar shoppers. 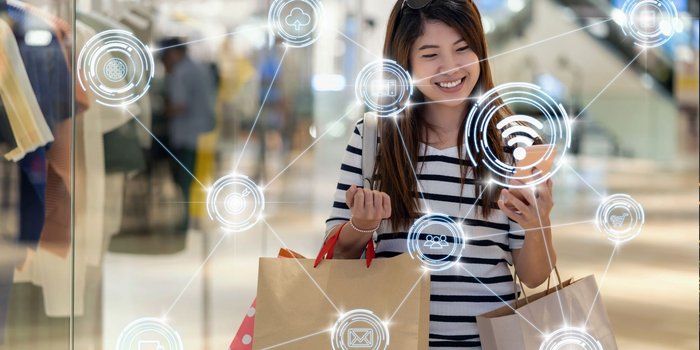 IoT Retail-Whether you’re an entrepreneur with a retail startup or the head of a traditional global corporation, you’ve likely seen first-hand the increased challenges of today’s brick-and-mortar retail environment.

The headlines here keep coming: Gap recently announced it was closing 230 retail stores, right after J.C. Penney, Victoria’s Secret and Payless ShoeSource shut the door on thousands of their own store locations. Clearly, legacy retail players are feeling the pressure.

What do these successful businesses have in common? Their leaders have seen the future in terms of customers shopping both online and in-store, which has led them to focus on an omnichannel customer experience. But retailers need a way to seamlessly integrate their in-store experience and digital presence. And that brings us to the internet of things. In fact, IoT is the technology that can bridge that gap.

Why should retail entrepreneurs care about IoT?

The omnichannel shopping experience is crucial to retail success in 2019. Some 73 percent of shoppers in one survey said they use multiple channels, according to a study reported in the Harvard Business Review, and the more channels those shoppers use, the more money they spend.

While many brands have focused on the online shopping experience over in-store experiences, retail leaders are realizing that today, customers want both.

IoT technology — which collects data from smart, wifi-connected devices — is changing the data game for brick-and-mortar stores. IoT can enrich physical retailers with data in the same way that ecommerce retailers have historically had access to data through tracking “cookies” and demographics. This is because IoT paves the way to new types of data from new sources, including in-store traffic counters, kiosks, inventory tags, even customers’ mobile phones.