The Intel Joule developer module will help enterprises, developers, and everyday tinkerers tap into the internet of things. The chip maker also detailed its vision for 5G networks at its Developer Forum show.

Intel this week announced the Intel Joule, a computing module for makers that includes Intel’s RealSense depth-sensing camera. Thegoal of Joule is to lower the hurdles to help companies and developers jump into the internet of things.

Developers can use Joule to improve existing embedded systems or help bring a prototype to market faster without breaking the bank. It’s a system-on-a-platform with a rapid computing engine, 4K video, and huge amounts of memory in a tiny, low-power package. Because it is based on an Intel Atom SoC, it can scale to high-volume production without much added expense.

Moreover, developers can tap into Intel’s software ecosystem for the operating system of their choice.

Intel notes that Joule can provide human-like senses to smart devices through RealSense. It allows devices to capture depth-of-field information and then process that data and turn it into computer intelligence about the environment and nearby objects. 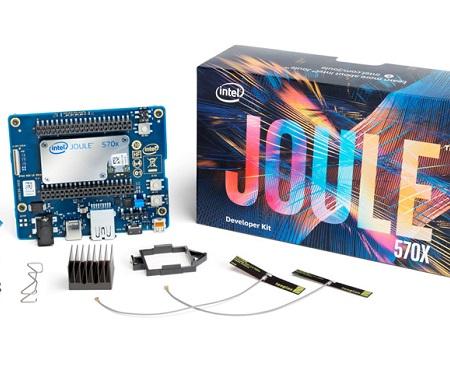 This in turn gives the machine the ability to make autonomous decisions based on what it sees.

Connectivity is key, but the Joule makes a curious omission.

“5G is really about the machines,” said Intel’s Sandra Rivera, vice president of Intel’s Data Center Group, at the Intel Developer Forum this week. “The tens of billions of machines and sensors that will connect and create the fabric of our future networks.”

At its core, 5G will reduce latency down to almost nothing, improve speeds to 1 Gbps, and boost capacity. The latency issue is vital to resolve for things such as self-driving cars and seeing, flying drones. The industry as a whole doesn’t expect 5G — which will target the Internet of Things — to really kick off until 2017 or later.