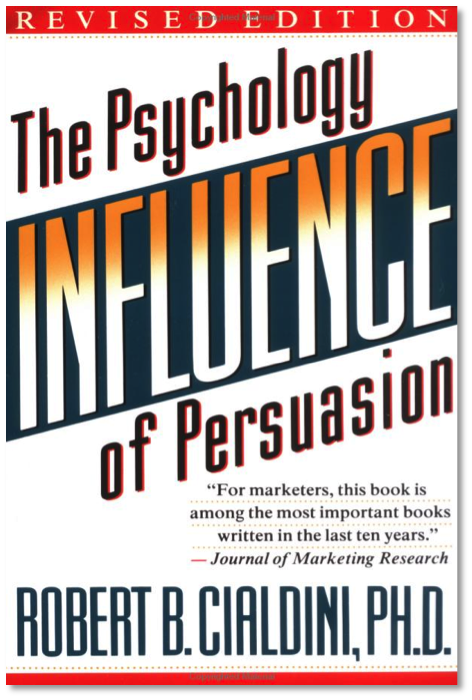 Our shortcuts in judgment can be used against us.

Influence Robert Cialdini Summary – Sometimes the behavior of animals can seem ridiculously simple. Consider the mother turkey, which normally cares deeply for its chicks but abandons or even attacks them if they don’t emit their distinctive “cheep-cheep” sound. Conversely, even a replica of the turkey’s arch-nemesis, the polecat, will elicit tender care from the mother turkey as long as it “cheeps” loudly. The sound is a simple trigger: a shortcut that allows the turkey to quickly and, in most cases, reliably identify its chicks.

In the case of the replica polecat, the mother turkey’s shortcut seems quite foolish, but we too use similar psychological shortcuts. We simply must, because the world is a complex place where it’s impossible for us to ponder the details of every decision we make. Thus, we use quick shortcuts, and most of the time they serve us well.

Just as scientists can trick a turkey into mothering a stuffed polecat, so-called compliance professionals, like advertisers, salesmen, con artists and so on, can fool us into using our shortcuts against our own interests. They usually do this to get us to comply with their demands, for example, to buy a product.

Commonly abused is the “price indicates quality”-shortcut: people usually assume expensive items are of higher quality than cheap ones. Often this shortcut is partially accurate, but a wily salesman might well use it against us. For example, souvenir shops often sell unpopular gems by raising rather than lowering their prices.

Because dealing with the complexities of life means having to rely on shortcuts, we must identify and defend ourselves against the manipulators who would trick us into wrongly using those shortcuts, lest we end up looking as foolish as the poor mother turkey.

Shortcuts in judgment can be used against us.

Humans have an overpowering need to reciprocate favors.

The rule of reciprocation states that we feel a duty to repay others in kind for whatever they have provided to us. This tendency forms the foundation of all societies, for it allowed our ancestors to share resources, safe in the knowledge that they would be reciprocated later.

If someone does us a favor and we do not return it, we feel a psychological burden. This is partially because, as a society, we are disdainful of those who do not reciprocate favors.

Several experiments have shown that people are so keen to rid themselves of this burden of debt that they will perform much larger favors in return for small ones. For example, when a researcher, “Joe”, bought test subjects a ten-cent Coke as an unbidden favor and then later asked them to buy raffle tickets, on average they reciprocated by purchasing 50 cents’ worth of tickets. . Obviously the possibility for abuse exists here, because in the research situation all the truly free choices were Joe’s. He not only forced a debt onto the subjects by buying them a Coke, but also chose their method of reciprocation.

The Krishna organization used this tactic to great effect when they gifted flowers to passersby on the street. Though generally annoyed, people often made donations to the organization to satisfy their need to reciprocate the flower.

To fight back against attempts to take advantage of the rule of reciprocation. You cannot reject all favors, as you would rapidly become a cranky hermit. Instead, identify offers for what they fundamentally. Whether genuine favors or abusive manipulation tactics, and only then reciprocate in kind.

Humans have an overpowering need to reciprocate favors.

Rejection-then-retreat is a devious tactic because it evokes reciprocation and the principle of contrast.

Just as we desire to pay back favors, so too do we feel obliged to match concessions in negotiations. If a boy scout first asks you to buy a five-dollar raffle ticket. But then retreats to requesting you only buy a one-dollar sweet, you are likely to buy the sweet to match his “concession,” whether you’re hungry or not.

In addition to our desire to reciprocate concessions.  The difference of the second to the first is magnified. Thus, the sweet in the boy scout example seems disproportionately cheap after the raffle ticket.

The rejection-then-retreat strategy has even brought down presidents, such as in the infamous Watergate scandal. In 1972, the re-election of President Richard Nixon seemed inevitable, yet somehow a man called G. Gordon Liddy. He managed to convince the Committee to Re-elect the President (CRP).  That they should give him 250,000 dollars to burglarize the offices of the Democratic National Committee.

This was a preposterously risky undertaking, but Liddy used the rejection-then-retreat strategy. He started by suggesting a one-million-dollar scheme involving kidnapping, mugging and prostitutes. Though his later second and third proposals were still scandalous and incredibly ill-conceived. The CRP felt they had to “give Liddy something” for his concessions from his first scheme. Also, compared to the initial outrageous one-million dollar proposal, the 250,000-dollar scheme involving “mere” burglary no longer sounded that bad.

Rejection-then-retreat is a devious tactic because it evokes reciprocation and the principle of contrast.

When opportunities become scarce, we desire them more.

A powerful influence in our decision-making is scarcity: opportunities are seen as more valuable if their availability is limited. This seems to be caused by the fact that people hate losing opportunities. Which is well-known by advertisers and is evident in their use of “For a limited time only…………………