Google says that the latest version of its Cloud SQL is more than seven times faster, and can scale better, than the previous generation.

Cloud SQL provides managed MySQL databases, among the most popular relational databases in use today. As a managed service, Google maintains customer databases with patches and updates, backs up and replicates data, and ensures availability through automatic failover.

Hesterberg said that while relational databases aren’t typically associated with flexibility, Google aims to change that perception by making Cloud SQL easy to scale, to start and stop, and to access with other tools. While App Engine can only connect to first generation Cloud SQL, Hesterberg said that will change soon. 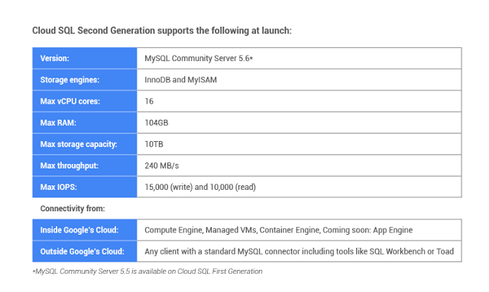 To help customers integrate and expand its services, Google has partnered with a variety of third-party vendors, including Attunity, Bime, Dbvisit, Looker, Pythian, ScaleArc, Tableau, Talend, WebYog, xPlenty, and YellowFin.

To encourage use of its Cloud Platform, Google is offering a $300 Cloud Platform credit. Google needs to do so because it continues to lag behind Amazon Web Services and Microsoft Azure. During the quarter that ended in June, AWS revenue (~$1.82 billion) was about four times Microsoft Azure revenue (~$400 million), according to Bloomberg. Meanwhile, The Information has estimated Google’s cloud revenue for all of 2015 will reach $400 million.

Competition in the infrastructure-as-a-service business has been fierce, and while Google (along with IBM) continues to try to gain marketshare, other companies have faltered. Dell, HP, and RackSpace have all retreated from the public cloud.

Also on Thursday, Google, with support from over 30 industry researchers, released PerfKit Benchmarker (PKB), an open source cloud benchmarking tool that can analyze the performance of cloud services at nine different providers, on local computers, or in data centers.