Google execs at the GCP Next 2016 conference pitched the company’s cloud platform by highlighting advantages, including security, commitment to open source, and machine learning.

“In the future, almost everything will be done in the cloud because it simply is a better way of doing computing,” said Google CEO Sundar Pichai in opening remarks at the Google Cloud Platform Next 2016 conference.

Such sentiment is expected at a cloud evangelism event. But Google wrapped its hard sell in an alluring package, the promise of machine learning.

“This platform is not the end, it’s the bottom,” said Eric Schmidt, chairman of Google parent company Alphabet. “And there’s something above it. Machine learning.”

Google demonstrated the power of machine learning earlier this month in South Korea where its AlphaGo system beat celebrated Go player Lee Sedolin four out of five games. The victory gave weight to the company’s insistence during recent earnings calls that machine learning represents a significant source of future innovation and revenue. 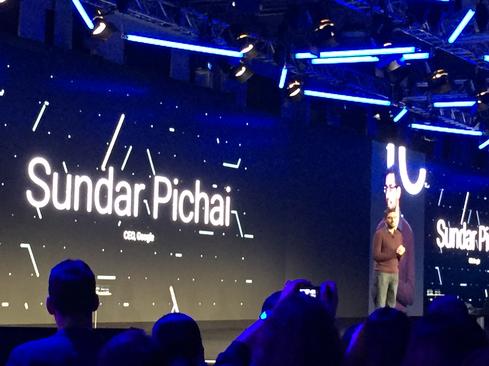 Toward that end, Google announced the alpha release of Cloud Machine Learning, a framework for building and training custom data models using distributed learning algorithms based on TensorFlow.

Learn to integrate the cloud into legacy systems and new initiatives. Attend the Cloud Connect Track at Interop Las Vegas, May 2-6. Register now!

Schmidt struck a conciliatory tone to court enterprise decision makers. He acknowledged that Google expected too much of companies as it moved into the cloud market with App Engine in 2008. The company didn’t provide the right stepping stones into the cloud, he said.

Google’s cloud offerings have become far more extensive, capable, and inviting since then, and the company is more solicitous to business customers. “We decided to meet you where you are, as opposed to where we think you should be,” said Schmidt.

Schmidt’s message of accommodation recalls another ad campaign, the competition between car rental leader Hertz and challenger Avis in the 1960s: “When you’re only No. 2, you try harder. Or else.” (Google ranked fourth in Q4 2015, behind Amazon Web Services, Microsoft Azure, and IBM in terms of public IaaS marketshare.)

Speaking to a group of South Korean journalists, Greg DeMichillie, director of product management for GCP, cited a price comparison tool validated by Nucleus Research that found GCP tended to be 15% to 80% less than AWS. “The reason our prices are lower is not just because we discount,” he said. “It’s because our technology is better and that allows us to be more efficient.”

In a press briefing following the keynote presentation, Greene faced a question about how Google is countering Amazon Web Services as the path of least resistance. She said Google is working to get the word out about what it sees as GCP’s advantages: security, commitment to open source, price/performance, and machine learning.

“Machine learning is pretty much revolutionizing every industry,” Greene said earlier during the keynote.