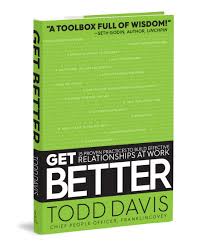 What’s in it for me? Give yourself a powerful set of tools for building strong work relationships.

Get Better Todd Davis review – It may seem obvious, but every meaningful relationship, whether it’s personal or professional, requires a fundamental set of attributes, such as trust, credibility, and considerateness. But that’s only the foundation of what it takes to build and nurture a healthy relationship. Open-mindedness and our general attitude toward those around us is just as important.

In this article, you’ll find a toolbox full of tips and ideas that you can immediately start using to create a healthier work environment. With these tools, managers will be better equipped to build strong teams, not to mention construct safe and comfortable places where employees feel respected and appreciated. And any employee eager to improve relations with coworkers can use them, too.

In this article, you’ll find

Being open to other perspectives can improve relationships.

It can happen to anyone: you think you have a complete understanding of something – and then, one fateful day, you discover that you had it all wrong.

Each of us experiences the world in a different way, but sometimes we get stuck seeing the world from a point of view that has room for only one truth. As a result, we adopt standard perceptions about ourselves and about others, and we begin to believe that this perception is the only reality.

You might get stuck thinking thoughts, such as, “I’m just not good enough,” “I’ll never change,” “My coworker is lazy” or “My friend is thoughtless.”

Here’s a common scenario: a coworker approaches you, saying that he’s frustrated with another colleague because he thinks that she’s so slow and lazy that she’s going to cause everyone to miss their deadlines. This is what the author, Todd Davis, was confronted with when his colleague Jon came to him with his concerns about their coworker Isabel. Now, Jon wanted Davis to talk to Isabel because Jon believed that he wasn’t a “people person.”

So, in Jon’s case, we have someone who believes himself to be bad at dealing with others and perceives Isabel as being slow and plodding. This is his truth, but it doesn’t have to be.

The better mindset is to reject narrow viewpoints about yourself, others and the world.

It’s your responsibility to take stock of your beliefs. Keep an open mind and hold yourself accountable for any narrow-minded perspectives you might have about yourself. The world or the people in your life.

You should also stay open to the perspective of others. The author reminded Jon that he was a good husband and father. Therefore, he likely isn’t so bad at communicating, and if he put his mind to it, he could probably have a productive conversation with Isabel. Perhaps he wasn’t as inept around people as he’d long believed.

Jon eventually realized that he’d unfairly labeled Isabel as slow and lazy, without taking the time to talk to her about it or understand her work ethic.

Avoid a regretful reaction by pausing to think things over.

Here’s another unfortunately common scenario: A rude customer complains and you lose your temper, firing off a curt email in reply. After some time passes, you cool off and realize how badly you reacted.

In situations like these, we have a tendency to let outside factors, over which we have no control, dictate our mood and feelings.

For example, how would you react if you found out that a colleague had been secretly working on a competing project behind your back? Surely, you can imagine how this external event might result in your feeling brimful of bitterness the next time you saw the person.

When Todd Davis was a young recruiter. He hired a new colleague who managed to negotiate a salary that was far higher than his own. Davis was infuriated that his boss had approved this decision. Which made him feel as though his work were being undervalued and unappreciated. For days, he complained to friends and family while feeling unmotivated and in the dumps.

This is a common reaction to unpleasant external events, but there’s a far better way to deal. And the first step is to stop and quietly take a moment to reconsider the situation.

Pausing is a great way to stay in control of your mood and feelings. When you allow yourself to calmly stop and think about what’s happening. You give yourself the time to develop a more nuanced understanding of the situation. With calm reflection. You can begin to understand your feelings and why you’re tempted to react in certain ways. Which can lead to better solutions than casting yourself as the victim.

After days of complaining, Davis finally paused to consider the situation and he came up with a much better response. He thought to himself, “Why not talk to my boss and ask for a raise?” Sure enough, his boss was receptive to the idea of raising his salary. As long as Davis worked a bit faster on his recruitment tasks in the future.

So remember to cool down, breathe and take five minutes to think things over.

Great relationships are built on credibility and having admirable characteristics.

You’ve probably heard about how important trust is to any successful relationship. It’s true – if people don’t think you’re credible, chances are they won’t have much respect for you.