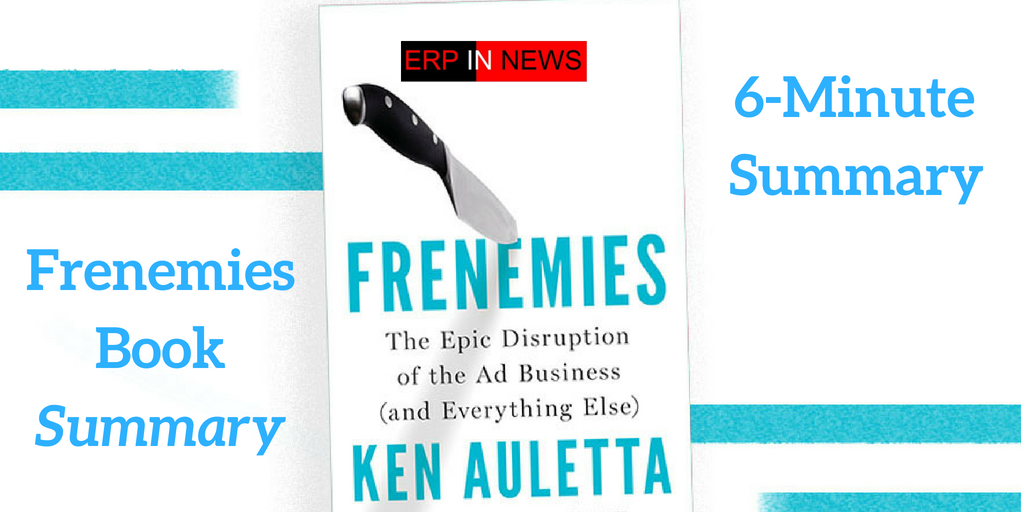 What’s in it for me? Take a whirlwind tour of changes in the advertising industry.

Frenemies book summary –  Advertising is ubiquitous in modern life. Whether on the screen or on the street, advertisements are always trying to persuade us to buy the newest must-have product. But, in recent years, marketers and advertisers have completely changed their approach, and what was once the art of persuasion has transformed into something resembling a science.

Indeed, over the last few decades, the marketing and advertising industry has changed drastically. How advertising agencies make money, how people view advertisements, how clients measure the success of advertising campaigns – each has been utterly revolutionized by technology and big data. And these new forces are only getting stronger.

In the article ahead, you’ll discover how the creative geniuses of twentieth-century advertising gave way to data whizzes who are more interested in customization than a single big idea. You’ll also find out why internet giants want to know more about your personal life than ever before and how changes in advertisement consumption have forever changed American politics.

In this article, you’ll also learn

Today’s marketing professionals are jacks-of-all-trades and they understand the importance of the smartphone.

You may wish that infuriating website pop-up advertisements had never been invented. But, as long as competitive economies exist, the planet will be plagued by advertising and marketing. They’re necessary because they connect buyers and sellers.

In ancient times, Greek and Roman advertisements consisted of writing on rocks and paintings on walls that announced the services of nearby tradesmen. Those were the good old days. Now, advertising and marketing are exponentially more complex.

It includes everything from direct mail to in-store promotions. It extends to the damage-control work carried out by public relations firms when a business is in crisis, like the emissions scandal that hit Volkswagen in 2015. It would even encompass the rebranding of companies and the redesigning of their corporate logos, like when the cable-television company Time Warner was rebranded as Spectrum.

Marketing also includes the advice that strategy-consulting groups such as McKinsey & Company give to CEOs on how to position their corporations. Millennial-generation influencers like the Kardashian family are also part of the industry because marketers commission them to feature particular products on Kardashian social-media platforms.

Until recently, the main mediums of advertising were television and radio, as well as print media like newspapers and magazines. But things have changed rapidly in the last decade. These outmoded media have been all but ousted by smartphones.

Mobile smartphones offer awesome potential for advertisers. They’re used by six billion people worldwide, and their capabilities are increasing all the time. For instance, a single iPhone 8 possesses a greater amount of computing power than the world’s first space shuttle. Indeed, smartphones are so powerful that they enable advertisers to track and interact with users in real time.

For instance, the gigantic Chinese corporation Tencent provides a platform for its users to both buy things and communicate with both friends and strangers. Not only do 80 percent of its 800 million users spend over an hour on the Tencent platform every day; these users also participate in up to 500 million interactions daily, using 300 million credit cards to shop at 300,000 stores online – all on the same platform!

Meanwhile, each user can be advertised to, and their activities can be minutely monitored. This enables advertisers to pick up on valuable user trends and shopper preferences.

The ad industry was once very lucrative, but tightening budgets are making ad executives uneasy.

Many of us have seen the popular television show Mad Men, which tells the tale of advertising companies and their executives in 1960s New York. But did you know that the show’s protagonist, Don Draper, is an amalgam of the mid-twentieth century’s most illustrious ad men, such as David Ogilvy, George Lois and Bill Bernbach?

In the 1960s, these executives ruled the New York advertising scene. They were masters of both creative content and client relationships. But things have changed since then, and the Don Drapers of today aren’t as secure as they once were.

For most of the twentieth century, advertising provided its executives with secure and effortlessly lucrative revenue streams. Why? Because the industry was………………