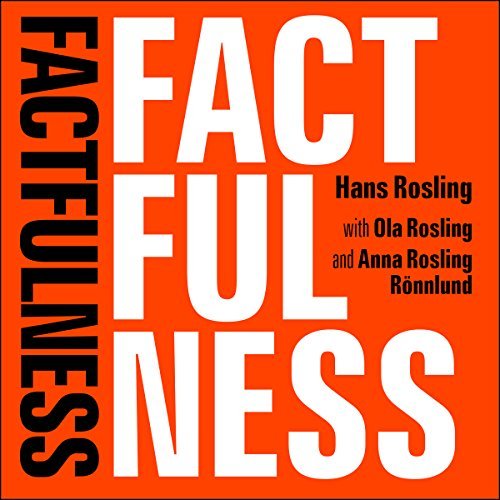 What’s in it for me? Change your worldview and recognize the amazing progress being made.

Factfulness Summary – In a perfect world, journalists would always present the news in a completely accurate way, and they’d give plenty of relevant context to make it even more impactful. But, unfortunately, we live in the real world, where journalists are in the business of attracting readers, and readers love things to be both super simple and full of drama. As a result, our worldview has become skewed — a poor representation of what the world is really like.

At the heart of our messed up worldview is the belief that people around the planet are worse off than they were before. But this couldn’t be further from the truth. In fact, there’s far less poverty than ever before, people everywhere are living longer and less of the world is being run by sexist and oppressive patriarchies.

All this positive change is the result of a global economy that continues to lift people out of poverty and increase their income levels. Indeed, if we combine middle- and high-income countries, we account for 91 percent of humanity. That’s pretty amazing, considering that, just 200 years ago, 85 percent of the world was mired in poverty.

This article will help us understand just how much progress has been made, and how we all can learn to overcome the negatives to see our world in a positive, accurate light.

“Megamisconceptions,” like the East-vs-West divide, prevent us from seeing the world accurately.

Here’s a question for you: Over the past 20 years, what has happened to the level of extreme poverty in the world? Has it nearly doubled? Stayed the same? Or been nearly cut in half? If you guessed that it has been nearly halved, you’re one of the few people to answer the question correctly.
In the United States, only five percent of people got it right; in the United Kingdom, only nine percent picked the right answer – and those who got it wrong include some of the brightest experts working today. The reason why so few people have an accurate understanding of the world is due in large part to our natural instincts and what the author calls megamisconceptions.

Some misconceptions are mega because of how deeply they mess up our understanding of the world. One of the big ones is Westerners’ “us-versus-them” mentality – that is, the idea that West and the East are fundamentally different and somehow at odds with each other. This is also referred to as the outdated concept of the “developed world” versus the “developing world.”

When the author gave lectures, he noticed that many students still thought that the East was filled with countries where birth rates are out of control and where religion and culture prevent the creation of a modern or “Western” society. As one of Rosling’s students put it, “They can never live like us.”

But who exactly is “they,” or the “East,” or the “developing world” – is both Japan and Mexico City still part of the East? Are China and India still considered incapable of being home to modern cities?

Back in 1965, if we just looked at the child mortality rate around the world, which is a great test of a nation’s overall health, education and economic systems, 125 countries would fall into the “developing” category of having over five percent of their children die before their fifth birthday. Today, that category only contains 13 countries.

In other words, there is no “West and the rest” anymore.

Other megamisconceptions come as a result of our negativity instinct.

Here’s another question: In all of the world’s low-income nations, how many girls finish public school? Twenty percent, 40 percent or 60 percent? Are you already starting to guess that the answer will likely be the more positive one?

Indeed, 60 percent of the girls in low-income nations finish public school. What’s more, on average, all 30-year-old women have spent nine years in school. That’s only one year less than the worldwide average for 30-year-old men.

These are just a couple signs of the amazing progress that’s been made – progress of which very few people are even aware. So why do these positives get overlooked? Well, one reason is our negativity instinct, which leads to the second megamisconception: that the world is getting worse.

The truth is, across the board, in just about every single measurable statistic, from life expectancy to (lack of) poverty, the world has gotten better. Yet, as human beings, we tend to focus on the bad.

In 1800, 85 percent of the world lived in extreme poverty; today, that percentage is down to nine! This is completely amazing, and yet you’re not going to hear about it in the news. News outlets are far more likely to report on natural disasters, crimes or any of the other dismal deviations from the otherwise excellent trajectory of the world.

Back in the 1980s, there was far less news to consume and entire ecosystems could be demolished without so much as one story in your local paper. Now, the entire world’s newspapers are at your fingertips, exposing you – and almost everyone else on earth – to more bad news than ever before. This overexposure gives the impression that things have gotten far worse in the past twenty years.

But remember, for every death you read about due to a flood or earthquake, there are many who survived the disaster that aren’t being reported on. In fact, thanks to advancements in affordable building materials, low-income communities are far safer than they’ve ever been. Today, the rate of deaths due to natural disaster is only 25 percent of what it was 100 years ago.

Our fear and size instincts, as well as our straight-line instinct, also contribute to our skewed understanding of the world.

If you see a chart with a line that’s going steadily up, your brain will likely tell you that this straight line will continue going up for the foreseeable future. However, very few charts have straight lines. Think of your own childhood growth rate; for a while, your height could probably be measured in a straight line, but then you hit a peak height, and it leveled off….