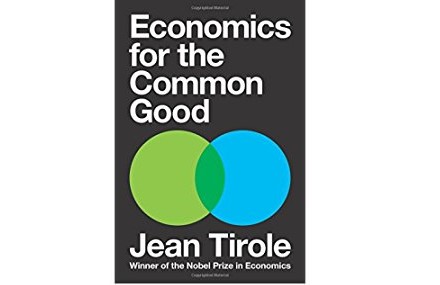 What’s in it for me? Delve into economics with a Nobel Prize winner.

Economics for The Common Good Review – It’s sometimes called the “dismal science,” but the weird and wonderful world of economics is anything but drab. As a clear-eyed observer of the world, Nobel Prize-winning French economist Jean Tirole can draw upon decades of economic expertise to illuminate common features of the world in a surprising, and often downright counterintuitive, light.

Between demonstrating why an anti-poaching NGO should sell confiscated ivory tusks rather than destroy them and explaining the debt crisis in southern Europe, Tirole takes a look at the big topics that shape our present and will determine our future.

Why do we need finance markets even after speculators demonstrated their recklessness in the 2008 financial crash? What stops us from tackling the looming threat of drastic climate change, despite the repeated warnings of scientists? And how can the state and free markets best be brought together to guarantee growth, innovation and the common good? These are just some of the burning questions this article will take on.

Our understanding of how the economy works is shaped by confirmation biases.

The way we see the world is shaped by our beliefs. We emphasize facts that confirm ideas we already hold, which is why we read newspapers that echo our own political views and seek out like-minded friends.

Economics is no different; our preexisting beliefs mold our attitudes toward the facts.

This means we often don’t make the wisest economic decisions. Instead of looking at the evidence and making decisions accordingly, we look for simple rules that we can apply to every new situation.

This approach can lead us astray because economics can be deeply counterintuitive.

Imagine an environmental NGO that campaigns against poaching. It’s just managed to intercept a consignment of ivory tusks being shipped by a group of poachers who kill endangered elephants. What should it do with the confiscated ivory?

Moral intuition tells us that the trade in illegal ivory is reprehensible, which means we should destroy it, right?

No! Economic reasoning suggests that the best option would be to do what the poachers were attempting to and sell the ivory.

But, you may ask, wouldn’t that just put the NGO in the same shoes as the poachers? Not quite. Selling the ivory would raise the needed funds that would allow the organization to continue its work in the future. Not only that, releasing the ivory onto the market would depress the value of elephant tusks by making them less scarce thus reducing the incentive of poachers to kill other elephants.

As you can see, taking a long-term perspective of the kind offered by economics changes the moral calculus involved in all sorts of decisions.

This doesn’t mean that economics is purely about cold rationality. Think of a market. At its simplest, it’s just a mechanism to allocate scarce resources; buyers and sellers meet in the marketplace to consensually exchange goods and services.

But markets aren’t the infallible mechanisms they’re sometimes perceived to be. Not every good can be bought and sold freely, and some things, like ivory, need to be more strictly regulated than others.

Imagine, for example, a market in which babies could be traded for cash by parents (the sellers) and adapters (the buyers). It’s easy enough to envisage both parties reaching a mutually beneficial agreement.

But here the economist will raise an objection. This exchange, she says, fails because it neglects the interests of a third party, namely the baby. This kind of market failure is the result of what economists call an externality – the cost of an exchange borne by a third party who can’t consent to the exchange.

And that’s where regulation comes in. It’s an attempt to safeguard the interests of all parties to an exchange, whether they’re those of babies……..