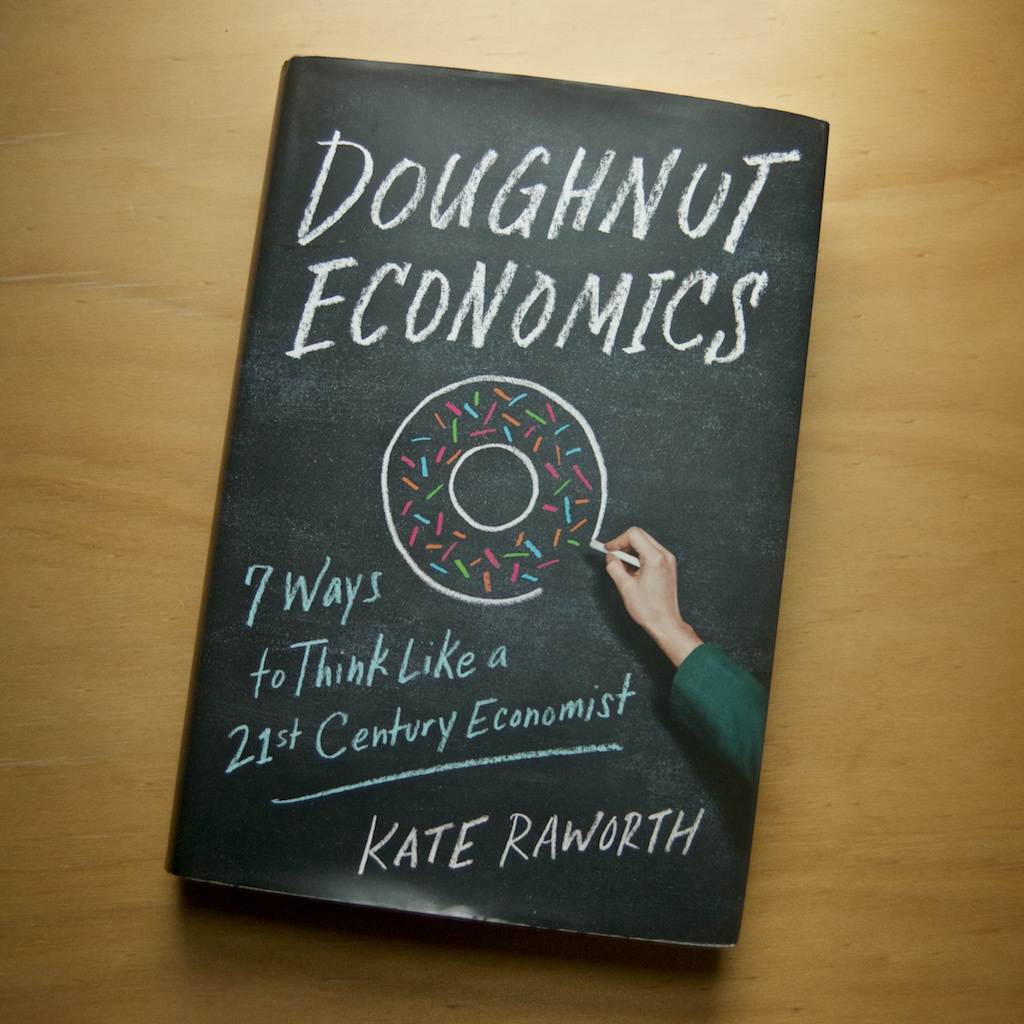 What’s in it for me? A new view on economics from an environmental envoy.

Doughnut Economics Summary – If it’s human to err, economists are just like the rest of us – they make mistakes. Theories that dazzle in textbooks end up leading us astray in the real world. Towering thinkers turn out to have feet of clay.

But economic ideas can have extraordinary staying power. As the British economist John Maynard Keynes once wrote, “practical men” who prize their independent-mindedness are often “the slaves of some defunct economist.” Misleading claims remain on the shelf in the marketplace of ideas long past their sell-by date.

Kate Raworth’s Doughnut Economics takes aim at an idea that’s long obsessed both economists and policymakers: endless growth. But her mission isn’t just theoretical. She argues that if we don’t kick our addiction to growth, we’ll end up destroying our planet. The neverending economic expansion isn’t just a defunct idea – it’s dangerous.

What’s needed now is a bold, contemporary approach. Out with the old, in with the new. If we want to survive and thrive on Earth, it’s time to start thinking like it’s the twenty-first century.

In this article, you’ll find out

The Doughnut is a new way of thinking about sustainable economics in the twenty-first century.

Economics is the world’s lingua franca, spoken by both business and government. Yet many of its basic assumptions are flawed. Crises like the 2008 financial crash have proved as much – economists just didn’t see it coming. Then there are the slow-burning issues of climate change and global inequality.

If it wants to meet the challenges of the twenty-first-century head-on, economics needs to change. Fresh thinking is the order of the day.

So where do we start?

One idea that might help us out of our current predicament is the author Kate Raworth’s concept of the Doughnut.

Picture a classic doughnut with a hole in the middle. It’s made up of two circles – one, the inside edge, and the other, the outside. The former can be thought of as the social foundation, while the latter represents an ecological ceiling.

Between these two rings – in the dough, to stick to our metaphor – is what the author terms “a safe and just home for humanity.” A place defined by dynamic balance. Within it, all our social needs can be met without overburdening the planet.

Let’s unpack the first concept: the Doughnut’s social foundation includes everything that humans need in order to live.

That covers basics such as access to clean water and food, but there’s more to it than that.

We don’t just want humans to simply survive, we want them to thrive. A full human life is about more than just having enough to eat. It also requires more abstract social goods like support networks, a sense of community, political representation and gender equality.

And what about the ecological ceiling?

Essentially, this is the ecological boundary we have to respect if we also want the earth to thrive.

The outer ring of the Doughnut functions as a “guardrail” to protect these key processes. If we cross it, we risk environmental catastrophe.

The problem, however, is that we’ve already leaped over the rail at least four times! Climate change, nitrogen and phosphorus loading, land conversion and biodiversity loss are already well underway.

The clock is already ticking and time is in short supply. If we want to get humanity into the Doughnut, we have to act now.

But before we do anything, we need to change the way we think about the world. And that starts by challenging our obsession with endless growth.

Economics is obsessed by growth, but it’s a narrow metric that doesn’t tell the whole story.

It’s worth remembering that economics wasn’t always about endless growth.

Take the ancient Greeks. For them, economics meant the art of managing a household. To master the discipline was to understand how to make the most of limited resources.

Making money and acquiring wealth was an entirely different kind of……..