Cloud computing showed a rapidly changing face in 2015 as many vendors altered their strategies to deal with Amazon’s clear dominance. Check out these seven gains and three setbacks that prove how volatile the cloud was over the past year.

Cloud computing has been around for a while now, but it is still a youthful, rapidly evolving field. The year 2015 proved that in a big way by shaking up several preconceptions of how the cloud was likely to develop and what would happen next.

The big story in the cloud during 2015 was the emergence of Amazon Web Services, not only as a sizable cloud provider — it was already the largest in 2014, with those estimates doubled in 2015 — but as a profitable one as well.

Gain: In the first quarter of 2015, parent company Amazon reported revenues for the first time. On April 23, Amazon said its Amazon Web Services unit had produced $1.56 billion in revenue in the quarter, with $265 million in operating income. Instead of the Amazon online retail operation financing AWS’s expansion, it was the other way around.

The worst news for would-be competitors was that Amazon still appeared to be in an early phase of its cloud customer base growth. The April 23 revenue figure was 50% higher than for the first quarter of the previous year, when Amazon’s infrastructure was already larger than that of all of its biggest competitors combined.

The good news was that the skilled construction of an automated services cloud led to a profitable cloud company, with services offered at rates that customers found attractive.

Setback: The bad news was that not everybody was going to be able to compete. Amazon has been a cash-generating machine with its constant growth in online sales and its cloud unit’s Web services. Who else had the deep pockets to build a global chain of data centers and offer online compute services? Previously, it was assumed that Amazon was one of many emerging cloud suppliers, each of which would find a market space and supply specialized services that suited it. That no longer looked like the case.

Even Amazon’s most successful competitor, Microsoft, looked scrawny in comparison. Deutsche Bank analyst Karl Kierstead guessed that Azure’s revenues for 2014 were $500 million-$700 million, or about one-tenth of Amazon’s.

Gartner cloud analyst Lydia Leong in May decided Amazon had 10 times the cloud infrastructure of its 14 largest competitors, as opposed to merely 5 times, as she had estimated in 2014. 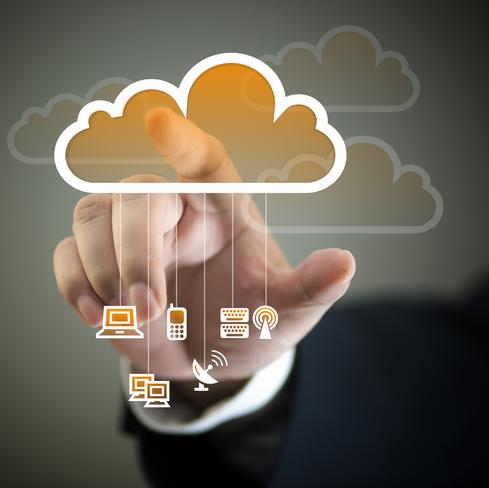 The estimate seemed to produce shock waves. Rackspace pulled back from competing hard with its public cloud and shifted to emphasizing its managed services side of the business. HP announced in late 2015 that it would phase out the public phase of its Helion Cloud at the end of January and concentrate on helping enterprises build out their private clouds.

Dell, EMC, and VMware said they’d try to find their footing in the cloud by uniting behind EMC’s recently acquired Virtustream service. “Few providers have the financial resources to invest in being broadly competitive in the cloud IaaS market,” Leong wrote.

Gain: One answer to the question of who else had the deep pockets was IBM, which had already publicly declared multiple $1 billion investments in expanding its SoftLayer IaaS and Bluemix PaaS. IBM was attracting a rapidly increasing investment from enterprise customers, in Forrester’s assessment.

[Want to learn more about the impact of the Internet of Things? See GE CEO: IoT Boosts Safety, Efficiency, Speed.]

Setback: Another answer to the deep-pockets question was Google, with its search engine revenue and its budding Google Cloud Platform, App Engine, and Compute Engine. But Forrester Research in November said it was going to take more than deep pockets. “Despite excellent technology and scale, Google will only begin to develop momentum in large enterprise business in 2016,” the report said. It ventured no explanation for why Google wasn’t already in the enterprise. It just made it clear that waiting for Google to show up with big numbers in the cloud is a lot like waiting for Godot; the big event is always just over the horizon. Startups like the Google cloud, while enterprises spend a lot more on cloud computing.

Possible gain: On Nov. 19, Google turned to board member Diane Greene, one of the founders of VMware, to take over its cloud services unit and put more emphasis on catering to enterprise use. In addition, Forrester cited DigitalOcean and Alibaba’s Aliyun cloud unit as prospects to grow into big cloud suppliers themselves.

Possible setback: Only another giant in the cloud with a transnational following (such as Chinese retailer Alibaba) will ever be able to compete with AWS.

Containers are also the target of substantial security improvements. Docker is taking away the “root privilege” that gives each container owner full access to host resources and restricting that privilege to a few system administrators handling the host for each user group. The capability is found in the 1.9 “experimental” release of Docker that came out Nov. 17.

Both Docker and CoreOS have added image scanning to the container images stored on their public hubs. The scans check the release numbers of downloaded code from Linux distributors and other repositories, checking for releases that might include known security vulnerabilities. The computer’s stored knowledge handles security checks, rather than relying on human system admins to know all recorded vulnerabilities and updates — a problematic situation.

Further gain: Containers can be wrapped in a slenderized virtual machine that further isolates them from harm or interference. Intel demonstrated Clear Containers, a container with a KVM virtual machine wrapper that retained most of the advantages of a container, at the OpenStack Summit in Vancouver last May.

On Nov. 16, VMware announced that its Photon Controller, a distributor of services to containers, would get an ESX virtual machine microvisor wrapper. The microvisor limits access to the package through a gateway that consists of 30 hypervisor commands. Without the microvisor, the container’s contents are accessible through the 392 commands of the Linux Syscall interface, a much broader attack surface.

At the start of 2015 there was no unanimity on what were the necessary elements of a container format. Docker had its own as a de facto standard. CoreOS had proposed a variation as a public standard. Cloud Foundry was committed to a more elemental, general-purpose “Garden” approach than either.

On the eve of DockerCon in late June, the contending parties got behind CoreOS‘s proposed Application Container specification, which became the centerpiece of the Open Container Initiative under the auspices of the Linux Foundation. The effort bears watching, but hopefully a shared format and specified runtime will be common to all systems in 2016.

Gain? Maybe. As fallout from the consolidation of the cloud market in 2015, many well-established, big technology companies that didn’t yet have a direct stake in the cloud cast about for what to do. Cisco had already tried to gain a foothold in a general-purpose cloud market with its own distribution of OpenStack. IBM backed both Cloud Foundry PaaS and OpenStack, and acquired cloud supplier SoftLayer.

Vertical technology stacks kept getting deeper: The VMware data center virtualization was supplemented by its public vCloud Air. Amazon has its own software stack on cloud hardware increasingly built from customized Intel chips. Oracle software is often found now in hardware-based combinations. IBM can combine its software and tools with SoftLayer/Bluemix cloud centers.

These cloud-oriented stacks have left other technology vendors wondering what their future will be without a cloud component. That might explain the combination of Dell, EMC, and VMware, announced Oct. 12 in a $67 billion deal. The new grouping will focus on using EMC’s acquisition of Virtustream as its cloud component.

Virtustream, founded in 2009, has the ability to run both VMware’s ESX and OpenStack’s KVM workloads, giving it potentially wide appeal to enterprise hybrid cloud users. But will that be enough? What does it take to survive as a technology company in the emerging cloud era? It’s too soon to say, but this merger shows what lengths traditional vendors are willing to go to avoid being left out.

Gain: The Internet of Things gets real. At GE’s Minds and Machines conference in San Francisco in September, the company said it would make its Predix analytics platform for machine data generally available by the end of the year. GE sees a coming era when physical assets will be managed through their streams of data and the analytics applied to them, rather than through technicians and field repair units fixing them when they break down.

“Machine learning,” or understanding the output captured in streams of machine data, became the catchword of the year. Amazon, Microsoft, and IBM each offered better ways to capture machine data in their clouds and apply machine learning to it.

IBM built an engine to run machine-learning algorithms, SystemML, to inject into the Spark analytics platform, a project in which it has invested heavily. Spark has its own MLib library of machine algorithms, but it needed a shared engine on which to run.

The IoT is still a confused picture of multiple and sometimes competing standards when it comes to collecting and handling data. But it’s still young, and we may gain some new perspectives in 2016.