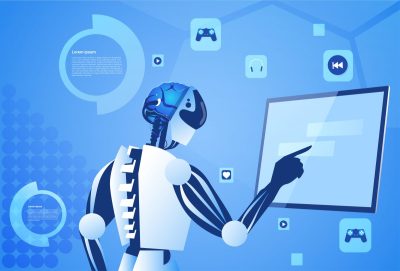 here’s a strange paradox surrounding the feverish embrace of artificial intelligence in recent years: The vast majority of companies talk a big game, but when it comes to putting AI into practice, most are still sitting on the sidelines.

According to a recent Forbes Insights survey of 313 executives from both medium- and large-sized companies, nearly 90% of executives say AI is either important or very important to the future of their company, yet just 25% have adopted AI into their businesses plans and processes.

What accounts for this gap between a universal acknowledgment of AI’s importance and such meager commitment to investment and adoption? The gap may be due to conflicting perceptions of AI, explains Sam Ransbotham, associate professor at Boston College’s Carroll School of Management. “People are saying, ‘Without AI, you’re going to be at a huge disadvantage in a relatively short time frame,’” he says. “But you also have people saying that it’s overhyped.”

The irony? “Both of those things can be true at the same time,” says Ransbotham. To sort out perception from reality and find some answers, we dug deeper into the survey and interviewed several leading AI experts. Their takeaway: There are three core challenges companies face in putting AI strategies to work. Here’s a look at each.

1. Building a Talent Pipeline One key finding from the Forbes Insights survey is that executives see assembling a team of skilled talent as a major challenge to implementing a robust AI strategy. And for many of them, it’s not just an IT staffing problem, but also a company-wide issue.

“We see that just 29% of executives are confident in non-IT talent having what it takes to unlock maximum value from AI in the near future,” says Ross Gagnon, director of research for Forbes Insights. “About half say the same for IT talent.”

But Gagnon doesn’t see hiring more skilled AI workers (who can be both costly and in short supply) as the solution. Instead, companies will need to retrain valued workers who are already on staff.