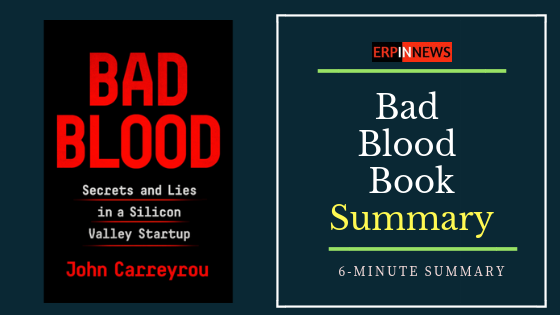 What’s in it for me? Get the gory details of a blood-based scandal so outrageous it’d make a vampire blush.

Things usually pan out one of two ways for these swaggering upstarts. Either the company makes it big and changes the world forever – think Google, Apple, and Amazon – or it falls on its sword after tasting defeat in a cutthroat market.

Enter Elizabeth Holmes, the charismatic, turtleneck-wearing wunderkind whose promise of a medical revolution had investors lining up to fund her brainchild: Theranos.

If something sounds too good to be true, it usually is. Theranos’ Edison wasn’t an exception. A tiny, ultra-portable, cheap and quick blood-testing device capable of screening for 200 common conditions, it was hailed as a “miracle machine.”

The only problem? It didn’t work. And that’s where this extraordinary tale of lies, subterfuge, deception and trickery starts getting really weird.

Elizabeth Holmes had a brilliant idea for a machine that could revolutionize medical diagnoses.

Like many people, Elizabeth Holmes was scared of needles.

It was this fear which gave her a great idea: a wearable patch which would test patients’ blood over the course of a day using microneedles.

Build that, she thought, and you’d not only do away with the need for needles but you’d also have a device which could provide real-time information on bloodwork to assist ongoing diagnoses.

By 2004, she was ready to start putting her idea into practice. She founded Theranos with Shaunak Roy, one of her peers at Stanford University.

But there was a snag. The pair soon realized that microneedles wouldn’t be able to draw enough blood. That’s when the original idea started to take on a new shape.

Their next idea was a credit-card-sized blood-testing machine which would draw a few drops of blood using a pinprick. That device could then be plugged into another, a slightly larger gadget which would run diagnostic tests.

The second, toaster-sized machine would perform chemical and conductivity tests to check for 240 common ailments. These ranged from vitamin D deficiency to herpes and HIV.

It was a machine that promised to revolutionize healthcare – if it could be built. Medical diagnostic tools would suddenly be at the fingertips of millions of people.

The duo started imagining a world in which everyone had a Theranos device in his or her home. Thousands of lives would be saved thanks to early diagnoses.

The machine could monitor hormone levels and forward the information to healthcare professionals on an hourly or daily basis. Doctors could then advise patients to take extra pills or call an ambulance.

Poor people would suddenly have access to cheap medical care. After all, the device would cut out the need for expensive doctors and nurses!

A blood test would become something anyone could have done while they were out shopping for…….