Amazon will dethrone Walmart as the No. 1 retailer of apparel this year, predicts Wells Fargo

Sep 13, 2018 Amazon, Amazon will dethrone Walmart as the No. 1 retailer of apparel this year, predicts Wells Fargo 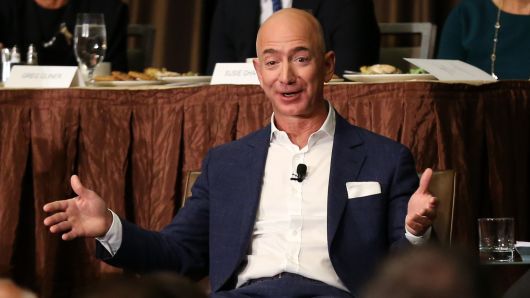 Amazon has another milestone in its sights. And this time, Walmart’s in the crosshairs.

The e-commerce giant will be the No. 1 seller of apparel in the U.S. in 2018, according to Wells Fargo, which raised its price target on the Seattle-based retailer Monday following new analysis into its clothing segment.

“Amazon dominates the online market for apparel and footwear (35 percent of share, or four times the #2 player) and they even have remarkably high market share in the total apparel/footwear market in the U.S.,” he wrote in a note to clients.

“The gross merchandise value (GMV) of apparel and footwear that was sold on Amazon’s platforms approached $25 billion in 2017 — representing five times to six times the amount of softlines sold on the site just 5 years earlier,” he added.

With chief executive Jeff Bezos at the helm, Amazon shares have rallied more than 22 percent in the past six months and 100 percent over the past year, and even briefly topped $1 trillion in market value. But despite the already-impressive swell in stock price, Wells Fargo expects shares to top $2,300 in 12 months, more than 17 percent upside from Friday’s close.

Bezos’ zeal for exploring new sides of retail is also proving lucrative, with a growing number of shoppers starting to purchase everything from socks to cosmetics on the website.

While the company has found success in selling casual items for everyday wear such as socks and underwear, partnerships with popular brands such as Nike offer added popularity.

Morgan Stanley issued a similar warning to clothiers earlier this year, when it also projected Amazon’s ascent to the top apparel spot.

“Though some retailers believe that their space and product category is well-insulated from the Amazon threat, others are taking a ‘if you can’t beat ’em, join ’em’ perspective,” Boruchow said.

Amazon’s success also owes much to its ability to drive web traffic to its site, the analyst argued.

In the second quarter, the number of unique visitors to Amazon.com in the United States accelerated to 190 million, 75 percent of all web users. Further, the company disclosed earlier this year that it has more than 100 million paying Prime members.

Analysts at Citigroup, meanwhile, said in a note published Sunday that they expect the number of Prime subscribers to more than double to 275 million over the next decade.