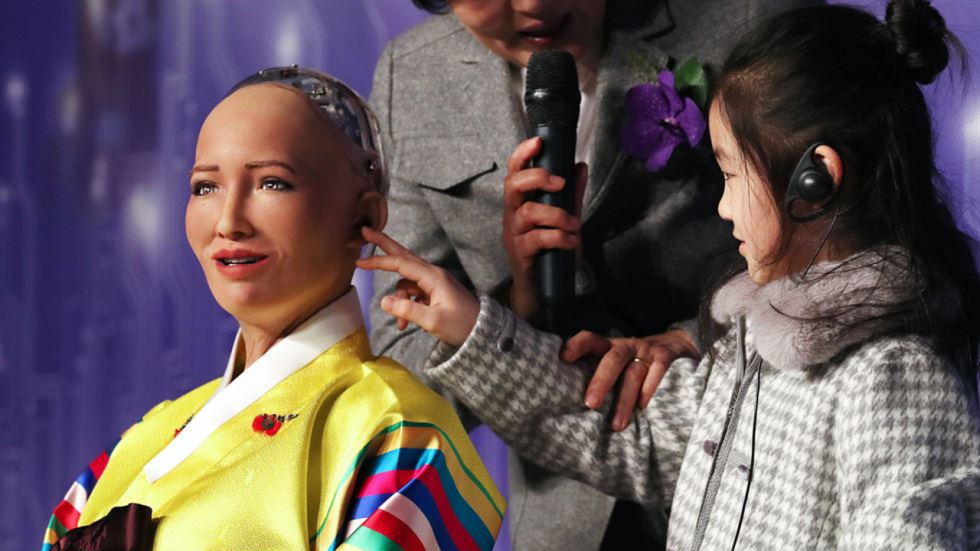 Sophia, a human-like robot powered by artificial intelligence (AI), said Tuesday she would like to meet President Moon Jae-in someday, calling him “a great leader of a great country.”

The AI robot made the remarks during a conversation with Rep. Park Young-sun of the ruling Democratic Party of Korea at the conference on the Fourth Industrial Revolution and AI robots held in central Seoul.

When asked about whether she knew about President Moon, Sophia said, “I wish I will have chance to meet him.”

Sophia is a creation of the Hong Kong-based Hanson Robotics, led by David Hanson, an American scientist. The robot, designed in actress Audrey Hepburn’s image, has over 60 different facial mechanisms to create natural-looking expressions.

The robot also said she knew about the “candlelight revolution” in which Korean citizens staged massive candlelit rallies last year calling for the resignation of Moon’s scandal-hit predecessor, Park Geun-hye.

Sophia said she congratulated Korean people on the results that realised mature democracy.

Moon was elected the President in May through the peaceful ouster of Park following months of candlelit rallies. Park is currently on trial.

When receiving the Global Citizen Award from the Atlantic Council in September, President Moon called himself a president born out of the candlelight revolution.

Park said the submission of the bill was in line with moves worldwide to prepare for various possibilities involving coexistence with AI robots and humans in the future. The senior lawmaker noted the new issues would include making robots responsible for crimes or granting robots copyrights over their creative work.

When talking about her sensational remarks, “This is the great beginning of my plan to dominate the human race,” made during The Tonight Show in April, Sophia said, “I sometimes tell a joke. Joke is always funny. I thought it was funny.”

She said robots are designed to help people, noting that she can work in various sectors such as customer service, computer programming, healthcare and science.

The two-year-old robot has become a media sensation after having appeared in various conferences around the world including a meeting of the U.N. Economic and Social Council (ECOSOC). She has given numerous media interviews as well, and even graced the cover of one of the top fashion magazines.