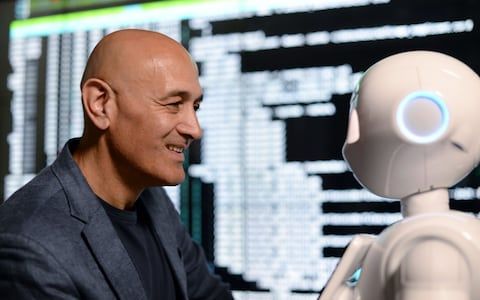 ARTIFICIAL INTELLIGENCE (AI) is a bigger threat to humanity than climate change or terrorism, the incoming president of the British Science Association has claimed.

Professor Jim Al-Khalili has warned that without concerted action by the government, industry and academia, AI could end up “uncontrolled and unregulated”, with development monopolised by just a few powerful companies.

In a preview of his presidential address, to be given at this year’s British Science Festival in Hull, Khalili said the change is “happening too fast” and that the full threat of process automation and AI to jobs and security had not been properly scrutinised.

He urged the government to regulate the industry, saying that AI is a greater concern than climate change, terrorism or antibiotic resistance

“Until maybe a couple of years ago had I been asked what is the most pressing and important conversation we should be having about our future, I might have said climate change or one of the other big challenges facing humanity, such as terrorism, antimicrobial resistance, the threat of pandemics or world poverty.

“But today I am certain the most important conversation we should be having is about the future of AI. It will dominate what happens with all of these other issues for better or for worse…

“Our government has a responsibility to protect society from potential threats and risks.”

Without an effort by public bodies and industry, the public could see AI as something sinister, he added.

“There’s a real danger of a public backlash against AI, potentially similar to the one we had with GM back in the early days of the millennium.

“If the public becomes disengaged, our leaders will see it as less of a priority. Regulations will need to be in place, and they may come too late. At the very least, this will result in the technology not being used to its full potential in the public sector, potentially leading to an increase in inequality in society.”

AI is already part of our daily lives through tools like Alexa and Siri, as well as the “almost psychic awareness” of Google and Facebook.

Khalili wants to address AI in the classroom, for starters, with the topic being included in the school curriculum. He also spoke about the need for public education programmes that would dispel the myths around artificial intelligence.