How 70% Of Fortune 100 Companies Are Innovating Through IoT Products 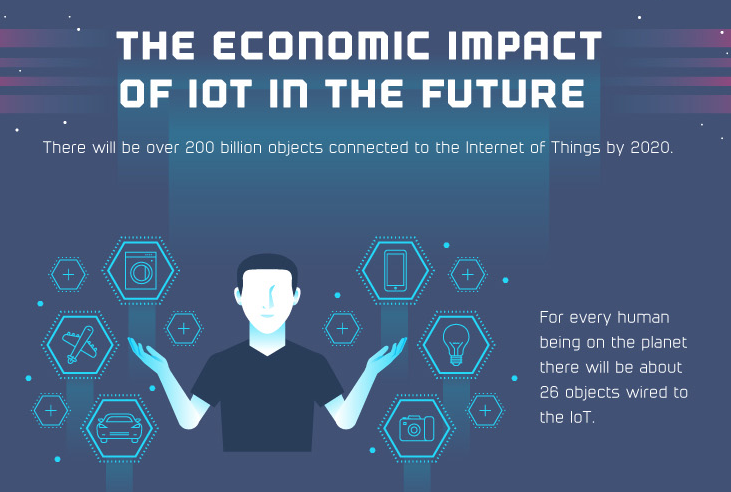 The IoT is more than just machines talking to each other. Consumers rely on it to make their lives more convenient. Industry leaders use the Internet of Things to sell products, automate workflows, and engage with consumers. As time goes on and the technology develops, you’ll see that the IoT is the reason for the Fourth Industrial Revolution (Industry 4.0)

Who is investing in IoT? Where are they spending their money? What impact does the Internet of Things have on the global economy? What will be the future economic impact of the IoT?

Check out these interesting facts and stats on the Internet of Things. Learn about the current state and how it will continue to evolve.

Although the Internet of Things is popular in consumer application, most IoT developments are being made for major companies. In a report by AppDirect, an IoT company specializing in cloud data management software, seven out of ten Fortune 100 Companies offer IoT products, services, or initiatives.

Here’s a couple of those companies and what they’re up to with the IoT:

General Electric (GE) founded GE Digital in 2015 with the goal of using IoT to predict maintenance needs. They created Predix, a software that takes data generated by machines and combines it with traditional data. All of this information migrates to the Cloud for analysis. GE has IoT products for the hospitality industry, the airline industry, and utility companies.

Rolls Royce uses intelligent sensors on their Civil Aerospace jet engines, combat jets, and other vehicles of flight. The sensors use Azure Stream Analytics and Power Bi to gather and interpret data from engines during flight. This data can integrate with traffic control operations, enable smoother flight patterns, or even lead to longer, safer operations for the aircraft itself.

AT&T aims to become the leader in the IoT networking. They have corporate partnerships with many other companies using the IoT. Some of these partnerships include GE, Cisco, and Intel. Their goal is to be the “go-to” network that major IoT companies use to connect all of their devices. AT&T has diversified their investments in different spaces of the IoT, including fleet and energy management and smart cars.

Google bought Nest in January 2014 for over $3 billion. Nest sells “smart” fire detectors that “learn” their environment through energy patterns. While smart home technology is one of the most popular IoT consumer applications, Nest was one of the first companies to market. Google also offers the Google Cloud Platform. It allows businesses and users to manage their data from anywhere.

What Areas of IoT are Companies Investing In?

Intel filed a report about where and how major industries are exploring the Internet of Things. Here area some of the areas where the big players in the IoT game are spending their money:

40.2% invest in Business and Manufacturing processes. This includes supply chains, robotic machinery and other industrial equipment. And real time analysis of the data collected from these operations improves their workflows, machine safety and bottom line.

30.3% invest in IoT Healthcare technologies. This could include anything from portable medical equipment, data management, and safeguards for the distribution, sale, and manufacturing of pharmaceuticals.

8.3% invest in Retail applications. Consumers can use smartphone apps to purchase products and the company can track and analyze their purchasing data. IoT is also instrumental in efficient inventory management.

47% of respondents offer IoT services bundled in with their products. This could be a product designed to interact with the Internet of things or an IoT enabled means of gathering customer data.

30% of companies surveyed offer an IoT related product as service. Examples of this include remote data monitoring, the analysing of this data, and the selling of the data.

4% of respondents offer a fully-integrated IoT service. This could be an entire software platform that provides IoT solutions to other companies (such as Cisco and AT&T.) These custom created IoT platforms can provide their users with unlimited sources of data.

19% of the companies surveyed report “Other” business models. Those models reported include:

– Offering a free IoT feature to their users

– Adding functionality to an existing product via IoT technology integration

The Current Economy of the Internet of Things

A Market Excerpt selected by PTC reports manufacturing to be the biggest industry utilizing IoT softwares. They expect this segment of industry to reach $438 million by 2021.

90% of manufacturers surveyed by PwC and MAPI plan to use or are currently using the Internet of Things to improve business operations. When asked “how much has your company transformed… to take advantage of digital/IoT enhancements” here’s how respondents answered:

– 56% of respondents said they are exploring how IoT technologies can adapt into their current business and enhance operations (boost manufacturing efficiency, cut production costs, etc)

– Only 14% of respondents are not exploring IoT technology as it relates to business operations. 8% of those surveyed claim to be “industry leaders” in adopting IoT technologies.

When PwC and MAPI asked these manufacturers to relay the reasons why they decided to “invest in IoT-enabled products and services” here’s how they replied:

The expansion of their market — 42%

To disrupt and/or because of disruptive competition — 32%

Other reasons reported include the desire to lead the IoT revolution, optimize their services, and to save on future costs. Please note that for this question respondents were instructed to select all answers that applied to their business.

The Economic Impact of IoT in The Future

The world of IoT is constantly growing. In 2006, there were only 2 billion objects connected to the Internet of Things. Gartner projects that by 2020, that number will grow to over 200 billion.

To put it another way, for every human being on the planet there will be about 26 objects wired to the IoT. Cisco estimates that, on average, each person will own 3.4 devices that are connected to the IoT.

But manufacturer’s think that’s going to change. Here’s how they anticipate IoT related revenues will increase over the next 5 years:

– 13% of respondents still anticipate 0% of revenue.

Here’s some more statistics that investigate the future economic impact of the Internet of Things:

Cicso believes Machine-to-Machine (M2M) connections and communications are set to boom. These connections are projected to exceed 12 billion by the year 2020. This will represent 46% of all of the devices connected to the Internet across the world.

Gartner believes that by 2017, there will be 8.4 billion devices connected to the IoT. If correct, this will be a 31% increase from 2016. By 2017, the total spending involved with these devices (endpoints, services, etc) will be almost $2 trillion. Gartner also forecasts that $547 million will be spent on IoT securities in 2018.

By 2020, the International Data Corporation (IDC) predicts that IoT global spending will have a compound annual growth rate of 15.6%. They estimate the market size to be $1.29 trillion by 2020.

What is the Internet of Things?