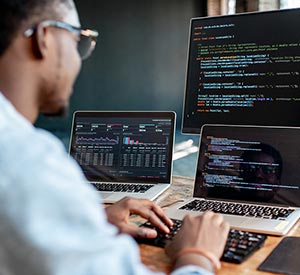 Bank and credit union executives more than ever need to keep up with fast-changing technology. Dozens of tech trends could be listed, but experts emphasize the importance of the five covered in this report. While not every institution will be impacted equally, collectively the trends point to where banking is headed.

Trends in Retail Banking-Where once banks and credit unions routinely left technology to specialists, the subject now has become elevated to the highest-ranking issue impacting retail banking. Research by The Economist Intelligence Unit (EIU) for Temenos finds that coping with new technology is the top concern of retail bankers, ahead of changing consumer behavior, political and economic instability and dealing with bad loans, among other factors.

No institution can afford to ignore the combination of new competition from fintechs and big technology companies, multiple new technologies, and soaring consumer expectations is bringing unprecedented change to retail banking that And few are ignoring it, as the EIU survey indicates. However, the how quickly and how extensively organizations respond varies sharply by institution and sometimes even by country.

In a study of 161 publicly traded banking institutions around the world, Accenture found that just over half are “digital laggards,” with no plans to go digital or just “half-hearted efforts.” About 40% are digitally active, doing many things right but still lacking true institutional commitment to digital transformation. Just 19 financial institutions (12%) from the group studied were “fully committed to transforming themselves into digital-centric institutions,” according to Accenture.

The following five technology trends collectively signal that the transformation in what it means to be in the banking business is far from over.

1. Open Banking and Banking-as-a-Service: More Than an EU Issue

Many financial institutions, particularly in the U.S., view open banking as a European issue. Some also see it as threat — and in a way it is — to traditional business practices. This viewpoint isn’t helped by the fact that the terminology is confusing. Terms such as “open banking,” “banking-as-a-service,” “banking-as-a-platform,” “open APIs,” “API banking” and “ecosystem banking” are often used interchangeably — incorrectly because they are not all synonymous.

As described in a BBVA blog, banking-as-a-service (BaaS) is an API (application programming interface) strategy that falls under the broader umbrella of open banking. “Generally, open banking refers to any initiative by a bank to open its APIs to third parties and give those third parties access to the bank, whether that be access to data or access to functionality.”

While it’s true there are no specific regulations in the U.S. duplicating the U.K. Open Banking initiative and the European Union’s Payment Services Directive (PSD2), which require financial institutions to allow third parties to have access to customer data, the underlying concept of transparency and giving consumers more control of their data is a growing focus at multiple governmental levels. It’s also a competitive consideration — a good example being the difference in approach to handling consumer data used by Apple versus Facebook and Google.

Eight Most Effective Ways to Get Free Instagram Followers